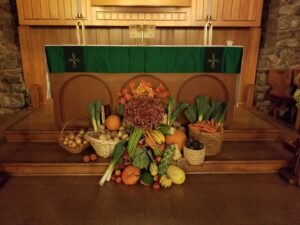 The altar decorated for Harvest Thanksgiving.

As you may have heard, Margaret Beattie, the Altar Guild President who has been involved with this ministry at St. Andrew’s and St. Mark’s and recently at All Saints’ for the last forty years, has decided to take a well-deserved retirement. Several other members of the guild have also decided to step down. We thank them deeply for their combined years of faithful service!

This blog post is for the information of people who may be considering joining the Altar Guild, as we are now gathering a new generation of folks to be involved in this ministry. You may not notice the Altar Guild’s work as it is largely behind the scenes! But there are many tasks that must be done if our worship is to run smoothly and reflect the “beauty of holiness” in the Anglican tradition.

Altar Guild members work in teams, and each team is on duty for a week every few weeks (depending on the size of the overall group). They tend and care for the linens, silverware, and glassware used on and around the altar, as well as cleaning the chancel (the area immediately around the altar) itself. They polish the brass, make sure the candles are filled with oil, and track and order the wafers and wine for the Eucharist. They change the paraments (the coloured hangings on the altar) when a new liturgical season begins, and they set up for and clean up after funerals, baptisms, and weddings.

It is a quiet and deeply prayerful ministry, which has the advantage of being able to be done at a time of the guild members’ convenience, as long as things are ready when they need to be.

Current and former altar guild members have offered me their reflections on the spiritual nourishment to be found in this ministry:

“I felt the most heartfelt thankfulness when we were finished cleaning and everything was ready for Sunday. I would sit quietly and look toward the altar – it was very heartwarming.” – Marina Bobbitt

“The Altar Guild members at All Saint’s by the Lake provides wonderful fellowship as we do the meaningful work of preparing the altar for Sunday services.” – Suzanne Taylor.

And more than a dozen years ago now, at Grace Church in Manchester, New Hampshire, I officiated the funeral for a saint by the name of Lee Swanson, who had been a member of the Altar Guild there for many years. She had written a reflection on her ministry there and included it with the directions for her funeral, and it’s stayed with me all these years:

“Sometimes I would strongly feel the presence of people who had worshipped here long ago, people who had knelt at the same altar rail we kneel at today, who had gazed at the same beautiful stained glass windows, joined in singing the same hymns and praying (almost) the same prayers.  I would feel as one with the past, the present, and the future.”

All Saints’ doesn’t have stained glass windows (yet!), but the sentiment is the same: the ministry of the Altar Guild is that of enabling the worship of the Christian community, worship that glorifies God and that connects us to the generations that have come before us and those that will come after. Perhaps this ministry is for you!