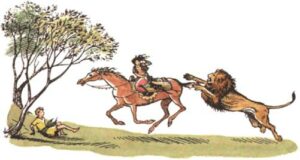 Illustration by Pauline Baynes from The Horse and His Boy

In C. S. Lewis’ The Horse and his Boy (the fifth of the Chronicles of Narnia), the main character, Shasta, has endured a desperate ride across a deadly desert to warn of a coming invasion and has bravely jumped off his horse to confront a lion that he thinks is about to kill his traveling companion, Aravis. The little group arrives at a hermitage where Aravis and the horses, exhausted and wounded, are taken in and cared for, but Shasta is told that the whole adventure may yet be in vain if he does not keep running on foot to warn the King of Archenland.

“Shasta’s heart fainted at these words,” writes Lewis, “for he felt he had no strength left. And he writhed inside at what seemed the cruelty and unfairness of the demand. He had not yet learned that if you do one good deed your reward usually is to be set to do another and harder and better one.”

These words kept coming to mind as I studied this week’s readings. One could say that each one of the four passages for this Sunday demonstrate this dynamic: where a character who has already done and given much, is called upon to do and give even more.

In the prophecy from Isaiah, the speaker (frequently described by scholars as “the Servant”) laments, “I have laboured in vain, I have spent my strength for nothing and vanity; yet surely my cause is with the Lord, and my reward with my God.” But instead of being able to rest and recuperate from this disappointing experience, he is instead given a new and even bigger commission by God: “It is too light a thing that you should be my servant to raise up the tribes of Jacob and to restore the survivors of Israel; I will give you as a light to the nations, that my salvation may reach to the ends of the earth.” Another and harder and better – and bigger! – task, indeed.

In the Psalm, the speaker, having extracted herself from the “desolate pit” with God’s help, now sets herself the task of telling the good news of God’s deeds in the great congregation, of living her faith not with burnt offerings but with the honesty of a converted heart.

In the Epistle, Paul and the Corinthian Christians have done one good and hard work – building a new congregation of Jews and Gentiles, rich and poor, uniting people with different gifts – and now must do the even better and harder work of actually living together and continuing to faithfully serve God despite disputes and divisions.

And finally, in the Gospel, John and his disciples have worked hard together, preaching repentance to the people and preparing the way for the coming Messiah. And now they have the bigger and harder and better job of identifying that Messiah and making the switch following him as he preaches his message of love, healing, and redemption to the world.

Frequently, we must embark on these new and greater tasks without even really knowing the scope and nature of the work we’re embarking on. I found it interesting that in the Gospel reading, John the Baptist says, not once but twice in the exact same words, “I myself did not know him.” How this meshes with the fact that Jesus is his own cousin, is an excellent question! But apparently, it took John until Jesus’ baptism to realize that he was the one they had been waiting for. Feeling ill-equipped and unprepared for the work God gives us is apparently something that happens to even the greatest of saints.

So how do we go forward to do these harder and better deeds? Because we may feel ill-equipped and unprepared, but God does in fact give us what we need, even if it takes us awhile to realize it.

One of the echoes between this set of texts that I particularly like connects the Psalm and the Gospel through the imagery of rocks. In the Psalm, God lifts the speaker out of the desolate, miry pit and sets her feet “upon a high cliff,” or, more simply in some translations, “upon the rock.” And of course, in the reading from John, Jesus tells Simon, “You are to be called Cephas,” which the writer helpfully translates as “Peter”, and of course both names mean “rock,” a fact which is much clearer to people who know what pierre means in French than it is to monolingual Anglophones!

So, when God calls us to bigger tasks, that’s where we begin: with our feet set firmly on the rock.

Below us, the rock; above us, the Spirit – as John saw, “the Spirit descending from heaven like a dove” on the occasion of Jesus’ baptism. While it’s not directly referenced in either text, the Spirit is central to the Servant’s interactions with God in Isaiah and to Paul’s letter to the Corinthians. The Spirit calls us, inspires us, strengthens us, and empowers us. Without the Spirit, it would be impossible for us to know God’s will, let alone do it.

Firm rock below, beckoning Spirit above – and all around us, the faithful love of God. God’s “steadfast love” or “covenant faithfulness” – the Hebrew word is chesed – is invoked over and over in both Isaiah and the Psalm. Wherever we go, whether we are restoring the survivors of Israel, declaring God’s deliverance in the great congregation, building and sustaining a Christian community, or seeking out a new teacher who is the Lamb of God that takes away the sins of the world – whichever of these hard and holy tasks we are pursuing – or whatever the task God is setting before us right now! – we pursue and fulfill our goals entirely surrounded by God’s love. God’s love that welcomes the nations, that sets our feet securely upon the cliff, that builds up the body of Christ, and that is so compelling that the disciples are drawn to it like moths to the flame, despite the risks and hardships that lie ahead of them.

Surrounded and bolstered by God’s love, we can do much more than we think we can.

And in C. S. Lewis’ story, in fact, Shasta finds the King and his party almost immediately and is able to warn them of the invasion in good time. He then mounts one of their horses, but falls behind the rest of the group and spends a strange and frightening night riding slowly along the edge of a cliff, with a mysterious and terrifying presence right beside him. But it turns out, of course, that that presence is not threatening or ghostly as he had feared, but is rather the lion Aslan, the equivalent of Christ in Narnia, who has been guiding, protecting and defending Shasta and his companions since the very beginning of their journey. When Shasta realizes this, Lewis writes, “a new and different sort of trembling came over him. Yet he felt glad too.”

It’s hard to imagine a more vivid illustration of the way it feels to go steadily forward, not sure where we’re going or what lies ahead – “I myself did not know him!” – knowing that the way is full of risk and danger, feeling that God is demanding more of us than perhaps we feel we can give, and yet still resting in the peace of God, which passes all understanding – the solid rock beneath us, the Spirit above us, and the love of God all around us, the warm breath of the One who is both Lamb of God and the divine Lion.

« Funeral sermon for Leonard McArthur
Is the Altar Guild for you? »