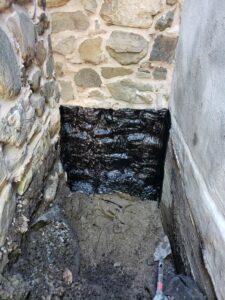 The chapel foundation after the waterproofing had been completed, post-flood, on Friday!

As a preacher going through the lectionary over and over again, one of the ironies you start to notice is that many of the very best stories get told in the summertime, when historically church attendance has dropped as folks travel or take time off. And certainly this Sunday qualifies! In addition to the ringing statement of Galatians 3 – “there is neither Jew nor Greek,” etc. – we also get two incredibly rich stories, Elijah in the wilderness and Jesus driving the demons out of the Gerasene man. There’s so much going on in both of them that it’s almost overwhelming.

And, in fact, both these stories are, to a considerable extent, about the experience of being overwhelmed. In the Elijah story, the prophet has just dramatically beaten the priests of Baal at their own game, by gathering them on Mount Carmel and challenging them to end a drought by calling down fire from heaven. When they fail at this and Elijah succeeds, he slaughters four hundred and fifty of the Baal worshippers and then runs before the king’s chariot with divinely inspired strength while the heavens open and a dramatic storm ends the drought.

But this experience seems to leave Elijah in a state of emotional hangover, not improved by the fact that Queen Jezebel is in fact trying to kill him. He flees into the wilderness, where he yells at God about wanting to die. Going even deeper into the desert, he meets God on Mount Horeb, where God asks Elijah twice “What are you doing here?” and Elijah replies both times with the same words (which don’t actually answer the question).

The first time, God responds to Elijah by sending the wind, earthquake, and fire, and finally the “sound of sheer silence” (what many of us first heard of as the “still, small voice”).

The second time, having asked the same question and received the same answer, God instead gives Elijah an assignment. The lectionary passage ends mid-verse, but after telling Elijah to return to “the wilderness of Damascus”, God instructs him to anoint two kings, and then anoint Elisha as his prophetic successor.

In response to being overwhelmed and wanting to die, Elijah rests and refreshes himself with food; then he goes even deeper into the wilderness and meets God face to face – not in the wind, earthquake, or fire, all manifestations of the overwhelm, but in the still, small voice that comes after. Only then is God able to ask a second time, “What are you doing here, Elijah?” and even though Elijah’s answer is the same, this time God is able to give him a plan, a course of action, and Elijah is able to carry it out.

The same sense of too much going on all at once pervades the reading from Luke’s Gospel. Like Elijah, Jesus and the disciples are already coming off of an intense experience: immediately before they land on the Gerasene shore, Jesus stilled the storm on the lake, in which the disciples were terrified and thought they would die.

They barely have the chance to get out of the boat before they are met by this man who is floridly in crisis and apparently has been so for a long time, such that the people who live with him most closely alternate between chaining him up and leaving him to fend for himself among the tombs, presumably hoping that if they ignore him he might go away.

There ensues a lively conversation with a legion of demons, and the dramatic plunge of a herd of pigs into the lake; and the responses of the swineherds, the neighbours, and the man himself range from fear, to excitement, to rejection, to wanting to stay and follow Jesus. It’s just people running around having feelings, all over the place.

Is there an equivalent, in this rather overwhelming story, to Elijah’s “sound of sheer silence” in which God is present? I would say yes – that brief moment when we glimpse “the man from whom the demons had gone out sitting at the feet of Jesus, clothed and in his right mind.” No longer raving to and fro between the tombs and the wilds, overwhelmed by the cacophony of demonic voices in his head, the man is now able to sit calmly and listen as Jesus speaks.

So what do these stories have to say to us today?

One thing I noticed as I read and re-read them is that the sense of overwhelm, of things spinning out of control and bordering on chaos, seems to be correlated with a pervasive atmosphere of violence. Elijah is caught in a spiraling cycle of killing, as he takes vengeance on those who have “killed God’s prophets with the sword” by killing hundreds of people himself, in turn. And the Gerasenes cannot find any way of coping with the man possessed by demons other than violently chaining him and keeping him under guard, keeping him coercively away from the community that provides everyone else with safety and belonging.

When we are overwhelmed, we lash out. And even more, when we are overwhelmed, we can’t see the solutions to our problems that might be less violent, less punitive, less harmful. We just keep blundering along, and sometimes God has to send a wind and an earthquake and a fire just to get our attention, before being able to get the actual message across in the still silence than follows them.

But God is also there, ready and waiting to take a legion of loud demons that have been yammering in our ears for decades, and drive them out.

The world has seemed particularly overwhelming in the past couple of years, and the temptation to lash out, thrash around, is strong.

A line of thunderstorms marched across Montreal on Thursday evening, sending more gallons of water pouring into our basement (this was thanks to an ill-timed attempt to fix a minor leak by digging a hole outside the chapel wall; the hole turned into an all-too-effective conduit right into the tunnel – Dave and Raymond worked heroically for half the night to deal with the situation, and the contractors came back on Friday and finished the job). It also flooded parking lots and playing fields and, in one memorable video, make a manhole cover downtown fly several meters in the air.

But on Friday morning the sky was a perfect blue, the world washed clean and glowing in that way that only comes after a good storm.

Perhaps the overwhelm, the wind and earthquake and fire, the raging of the demons, were necessary in some way, to clear the air, to uproot old certainties, to shake things up so that something new could take root.

But God invites us into the calm in the midst of the storm – and into the shiny, washed-clean morning on the other side.

The world may thrash and rage and give rise to violence, but faith offers a different path.

This is the last sermon I’ll preach from this pulpit for more than two months. (I’ll be here next week, but Bob is scheduled to preach.) Our parish, and the world, and all our lives, are still reeling from an ongoing global pandemic and all its fallout, not to mention the multiple other crises that seize the headlines every day.

Yet at the same time, summer stretches before us, offering at least the hope of some time to think, to breathe, to reflect, to just be.

Whether you’re heading off to your cottage or staying in the city, I hope that in the next eight weeks, you’ll find some time to listen to the still, small voice; to sit attentively at the feet of Jesus and learn what he has to say. To hear the question, “What are you doing, here, [Elijah]?” And then to go forth, rejoicing in and proclaiming what God has done for you.

« That they may all be one
BIBLE STUDY – SHOULD WE DO SOMETHING DIFFERENT? »