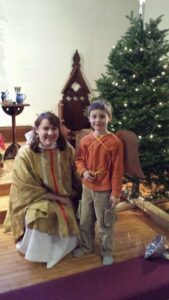 While she followed Paul and us, she would cry out, “These men are slaves of the Most High God, who proclaim to you a way of salvation.” She kept doing this for many days. But Paul, very much annoyed, turned and said to the spirit, “I order you in the name of Jesus Christ to come out of her.” And it came out that very hour.

Three years ago when I preached on this text, my sermon was a first-person narrative in the voice of one of the anonymous people imprisoned along with Paul and Silas. It was tempting, this year, to do the same for the equally anonymous slave girl, because this brief and fascinating story raises far more questions than it answers. How did the slave girl feel about being driven by her “spirit of divination” to follow Paul and Silas around and comment on them? Did the removal of the spirit come as a relief, or an unpleasant shock? Why was Paul so “annoyed” when the spirit was telling no more or less than the exact truth? And what happened to the girl after she disappears from the story, as she bore the brunt of her enslavers’ anger?

One thing that the story does tell us – or, rather, that the story assumes – is that demons can in fact be expelled from people. Of course, this is only one of numerous exorcisms related in the New Testament (though it’s actually the first one narrated in the Acts of the Apostles). It is simply taken for granted that Paul, as soon as he chooses to do so, can turn around and order the spirit out of the girl. It is not an enduring part of her. She can be delivered from it (whether in fact she wanted to be or not).

This exorcism is in stark contrast with Paul and Silas’ mission of preaching the Gospel, whose goal is precisely to connect people by baptism with the living God, who became human, died and rose again in Jesus Christ (and that is exactly what they do later in the passage, when the jailer is baptized along with his household). And the bond between God and us in baptism, once established, is indissoluble; it cannot be broken.

The latter part of Easter season is a time of disconcerting time-warps. With Paul and Silas, we are in Philippi a decade or so following the Crucifixion; in Jesus’ discourse in the Gospel, around the table at the Last Supper, the night before the Crucifixion; and in Revelation, we anticipate the literal end of time. And to add another level, this past Thursday was the Feast of the Ascension, commemorating the occasion forty days after the Resurrection when Jesus gathered his followers on the mountain and was taken up from them into heaven.

But thanks to Jesus’ promise of unity, we know that all these times are, in fact, one. In the Gospel, Jesus addresses the Father “on behalf of those who will believe in me through their word, that they may all be one.” That’s us – those who believe through the disciples’ word, because one person told another about Jesus, in an unbroken chain right down to our own time.

We often assume that the disciples had a unique understanding of Jesus, because they were privileged to walk the same earth that he did when in the flesh, to know what his face actually looked like, the sound of his voice, to hear all the things he said that didn’t make it into the written records. And this is almost certainly true. And yet, as one of my colleagues pointed out in our study group this week, everyone who has ever partaken of the Holy Eucharist knows Jesus, is connected with him, is one with him, on a cellular level, a level of almost unimaginable intimacy; we have taken him into our literal bodies. And this is the unity promised in the passage from John.

We are one with God through Jesus, across all places and times, because God came to us in Jesus, died, rose again, and ascended into heaven. The feast of the Ascension was this past Thursday, and we are singing several Ascension hymns today, celebrating that occasion on which Jesus brought us, in all our physicality and weirdness and complexity, right into the presence of God. A “spirit of divination” can perhaps be driven out, but the spirit of God cannot.

Of course, being one with God means we are also one with another, and that’s not always comfortable. We want to defend ourselves from people we don’t like or trust, and we want to distance ourselves from people who do terrible things. And in a very real sense, that’s what sin is: actions by any one person that hurt the whole, because we are all, unavoidably, one. The headlines this week have once again brought that back to our attention with painful immediacy: how hatred, aggression, and cowardice tear at the fabric of our common life.

But the solution is not less unity: it is more. It is taking care of each other, ensuring that everyone’s basic needs are met, and combating falsehood with truth. It is driving out the false spirits from our midst, so that the divine presence can be fully revealed, and Jesus’ prayer may come true, that “the love with which you have loved me may be in them, and I in them.”

Throughout my childhood, my mother directed our parish Christmas pageant, which was a dramatized service of Lessons and Carols that comprised the whole liturgy on the morning of the Fourth Sunday of Advent. Around a symbolic tree set up in the middle of the chancel, the children acted out the stories of Adam and Eve, the prophecies, and the Nativity, and an adult playing “the Angel of the Lord” invited each character in turn into the story of salvation by sprinkling glitter on them – first Mary at the Annunciation, then the shepherds when the angels appeared to them, and so on.

At the very end of the service, the Angel of the Lord stood beside the tree and read today’s reading from Revelation, the very last few verses of all of Scripture. The first year we did this script, unprompted and on impulse, he finished the reading, reached into his stash of glitter one last time, and flung it all at the congregation. My mother, watching from the back of the church, burst into tears. And that gesture was enshrined in the script every time it has been produced since.

The glitter, of course, never quite came out of the church carpets despite repeated vacuuming. But perhaps that makes it the best possible metaphor for our unity in faith with those who have gone before. Just like Mary and Joseph, Paul and Silas, the disciples around the Last Supper table, and John the Divine being stunned by the vision of the Holy City, we cannot be separated from God and from one another. We are part of each other. Our unity is indissoluble.