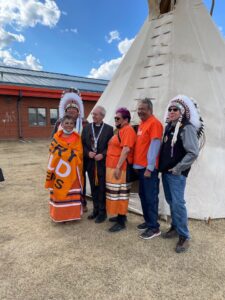 Archbishop of Canterbury Justin Welby, with leaders on the James Smith Reserve in Saskatchewan, April 30, 2022

The parallels between Saul’s encounter with Jesus on the road to Damascus, and Peter’s conversation with him by the sea of Galilee, are obvious. Both men have done something terrible – one could argue, unforgivable. Saul persecuted Jesus’ followers; Peter, a disciple, denied that he even knew Jesus. Yet both are indispensable for God’s future plans. And so both have an encounter with the risen Lord, in which no punches are pulled about what they have done, and yet they are offered the chance for reconciliation.

Reconciliation – a buzzword we hear a lot; one which All Saints has incorporated into our own tagline, “Reconciling, Affirming, Rejoicing”, and which is used in the land acknowledgement we say every week.

The world these days feels even more fractured and fractious than ever, with COVID and the Ukraine war layered on top of the existing fault lines of climate change, wealth inequality, racism, and on and on. And yet we have no alternative but to persist; Jesus has called us into risen life, and in our baptism we have enlisted on the side of reconciliation in this cosmic struggle.

So what can we learn about reconciliation from these stories of the earliest and greatest of the apostles, as they lived through their worst screw-ups and came out on the other side, filled with joy and ready to proclaim the Gospel?

First, truthtelling is essential. In these stories, everyone knows what happened. Peter and Saul do not try to deny the reality of the things they did. The denial of Jesus and the persecution of his followers happened in public; there were witnesses – so trying to claim that those who did these things were innocent, would be pointless. In a weird way, that actually makes things easier; reconciliation is much harder when the harmful actions took place in private and so the perpetrator has the option of claiming they never happened.

Last week, the Anglican Church of Canada was rocked by the announcement that National Indigenous Archbishop Mark MacDonald, a historic figure and a leader who was widely beloved and respected, had resigned and relinquished his ordination after it became public that he had committed sexual misconduct. This is – rightly – all that we will ever know about what happened, and it is devastating on multiple levels, for the church as a whole and particularly for the fledgling Indigenous church. Thankfully, MacDonald is not attempting to deny what he did, which at least lays the groundwork for healing, even if it is entirely appropriate for him never to hold a leadership position in the church again.

It is noteworthy, as well, that both Saul and Peter are promised, as part of their reconciliation with Jesus and his followers, that they will suffer for their faith and ministry in the future. God tells Ananias “I myself will show him how much he must suffer for the sake of my name,” and Jesus promises Peter that in his old age, he will redeem the cowardice of his denial by embracing martyrdom. Reconciliation has consequences, and those consequences frequently do – arguably, they should – involve discomfort for those who did harm. And after telling the truth, willingness to embrace that discomfort – gladly and freely – is a good indication that those people are genuinely ready to repent and move forward.

Finally, a third element of healthy reconciliation is having a plan or project to work on together as you move forward. As one of my colleagues said when we discussed this passage in our lectionary group this week, “There’s no reconciliation without mission.” Peter and Saul both agree that the most important thing is to go forward with proclaiming the gospel of Jesus Christ – in whose resurrection we are all reconciled and made new – and those around them, who have witnessed both their wrongdoing and their repentance, concur. So after telling the truth and accepting the consequences, they can put it all behind them and work together to make things better.

Which is not to say that Peter and Saul never did anything wrong ever again; God knows they did – and in fact they had more than one occasion where they butted heads with each other over the details of their mission. But they were absolutely united in the importance and centrality of that mission, for which from this point on both were willing to suffer and die.

Our society is terrible at real reconciliation. We are not taught how to honestly admit the bad things we do and make genuine amends. I’ve seen some very encouraging things about how that’s changing for today’s children – parents and schools teaching actual procedures for truth telling, accepting consequences, changing behaviour, and moving forward – but I know that most adults are still operating within a paradigm where we were taught to grudgingly say “sorry,” while defensively not admitting actual wrongdoing, and then stuffing down our feelings of guilt and shame while hoping the whole thing would just go away.

But genuine reconciliation is liberating. It is like coming back to life. In my experiences with addressing these things head on, it is excruciating while it’s happening – you can feel Peter’s discomfort and shame as Jesus asks him, over and over, “Do you love me?” But once everything is out in the open, and we have decided to remain in relationship, there’s an energy, and a joy, like nothing else. You almost can’t help laughing. God is very present in those moments.

Yesterday, we saw in our news feeds the images of the Archbishop of Canterbury, Justin Welby, visiting the James Smith Reserve near Prince Albert, Saskatchewan, and offering the first formal apology from the Church of England, representing the global Anglican Communion, to those who were abused in the residential school system. This is just a first step, and it is messy; there were other visits the Archbishop was planning to make that were cancelled because the parties could not come to an agreement about how to proceed. But the joy is nevertheless real, and I was deeply moved to watch the videos of the dances that followed the apology ceremony, especially the small Cree children decked out in full regalia and learning to follow in the steps of their ancestors.

We often wonder, what gave those early disciples the extraordinary courage to travel all over the known world and preach a message that they knew was likely to get them imprisoned or killed? And it’s easy to say, “their experience of encounter with the resurrected Christ!” But if that was an experience exclusive to them, one that we can’t share today because God is no longer with us in the flesh, it’s the opposite of helpful.

But true reconciliation is one way that we encounter the living God.

It begins with truth-telling; it continues with accepting the consequences of what one has done; and it goes out into the world to change things so that the hurt and harm never happen again.

It is liberating, it is life-giving, and it is the promise of the resurrected Christ.