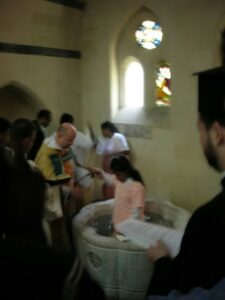 I spent Holy Week and Easter 2006 in Istanbul. I attended services at Christ Church, the Church of England chaplaincy there, which was built in the 1860s as a memorial to the dead of the Crimean War. On Easter Sunday morning, four people – three adults and an older child, all refugees from Sri Lanka – were baptized. And I was impressed and more than a little baffled to see that the font at Christ Church is an immersion font; not quite full bathtub sized, but the candidates climbed into a pool of water a couple of feet deep, knelt down, and bent forward to be immersed. As far as I could tell, the marble font was original to the building, which is fascinating, because the Victorians were hardly known for advocating this style of baptism; we associate them much more with babies in long white dresses being sprinkled only a few days after birth.

We’re baptizing two pandemic babies this morning – one ten months old, the other over a year. Both of them would have been baptized months ago under normal circumstances. Hopefully there won’t be too much undignified wrestling as part of the process!

But that’s not why we’re using a vintage baby bathtub as the baptismal font today. This setup is because one of the babies, Amelia Cyr, comes from a family that’s part Eastern Orthodox, and that tradition doesn’t just pour water on a baby’s head at baptism, it dunks them: a request to which I gleefully assented when the family made it. I’ve been a priest for thirteen years but this will be my first immersion baptism (well, quasi-immersion; it will be more of a sit-and-pour situation).

So why am I so excited about this? Why was I so thrilled to watch on that Easter morning sixteen years ago as the candidates climbed into the marble tub at Christ Church, Istanbul, and emerged dripping from head to toe?

In the Book of Alternative Services from which our baptismal service is taken, the directions say: “Each candidate is presented by name to the celebrant … who then immerses, or pours water upon, the candidates.”

Immersion is – or at least should be – the default. It certainly was at the beginning, when Jesus was baptized in the river Jordan, and the Ethiopian eunuch in a pool by the side of the road in the desert. And we baptize at Easter, because the waters of baptism are also the waters of death and the waters of birth. “For as all die in Adam,” writes Paul, “so all will be made alive in Christ.”

Before being born, a child floats safely, surrounded by water. When we imagine death, we often picture a dark river, or ocean waves – “crossing the bar”. Being immersed in water – washed, drowned, overwhelmed – is a fundamental image of transition, of letting go and losing control, and to come up out of the water and begin breathing is to be born, or reborn.

In baptism, we are buried with Christ in the tomb and raised with him on Easter morning. We are reborn in the birth waters of the new creation. Listen carefully to the words of the prayer I will use to bless the water for baptism in just a few minutes, and you’ll wonder why we ever stopped immersing people!

There’s nothing wrong with a baptism by pouring or sprinkling. It’s perfectly valid – it’s how I was baptized, and it’s how we’re going to baptize little Siena, who’s just big enough that if we put her in the tub she might decide to climb right back out. But if we possibly can, why would we not embrace the fullness of the symbol? Why would we not act out literally what we believe happens spiritually, when someone is washed in these holy waters and comes out on the other side a new person, a member of the body of Christ and the family of God?

In doing so, we tell the truth: that this is an earth-shaking, life-changing moment. That nothing will be the same, ever again. A baptism by immersion shows us two things, which sound contradictory but are not.

One is that life will often be overwhelming. It will be too much. It will feel like we have water up our noses and we can’t breathe. We will despair, and be tempted to let go and be pulled under.

But the other thing is that in fact, the waters will never drown us. Because God has gone before us and is with us. In Christ, in these waters, we have already died, and so there is nothing left to fear. Christ has died with us, and so we rise – we have risen, we will rise – with him. The last enemy to be destroyed is death.

For many of us, I think, the past two years have felt like a constant pummeling by waves – of fear, of upheaval and confusion, of grief. And we are not done. We may have gotten our heads above water for now, but there are other waves to come.

And yet, because Jesus has gone ahead of us and is with us, we know that death will never have the final word. We have all died in Adam, and we will all be made alive in Christ.

Christ is risen. Let us plunge with him into the waters of death and new birth, and rise again on the other side. Alleluia!

« Out of the pit
Reconciliation, then and now »