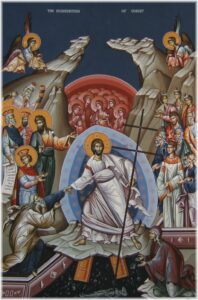 Icon of the Anastasis (Harrowing of Hell)

When the confirmation class got together in mid-March to start thinking about this service, we read all six of the stories and prophecies that we heard tonight, sitting downstairs in the dark with our candles. We put up big yellow sticky-note posters on the walls and wrote down the themes and images that we noticed.

We observed that all of the traditional four elements were represented – earth, air, fire and water. We found themes of creation, nature, life – and also destruction, chaos, death. Lots of death, in fact. We wondered about a God who saved God’s chosen people through the flood and over the Red Sea, but also let that flood destroy all other life on earth and slaughtered the armies of Pharaoh. We had a few “ew” moments about the slimy whale belly and the idea of a whole valley full of dry bones standing up and reanimating. We thought about the idea of exile, deliverance, and covenant – the pattern by which God’s people are always promising to love and obey God, and then screwing up and getting themselves into a terrible situation, but God is always there to welcome them back, rejoicing over them with gladness and exulting with loud singing. And I’m guessing at least one or two of the kids, though they didn’t say anything, wondered, “what the heck has any of this got to do with Easter?”

Well, let’s figure that out.

When Jonah prays to God from the belly of the whale, this is what he says:

I called to the Lord out of my distress, and he answered me; out of the belly of Sheol I cried, and you heard my voice. You cast me into the deep, into the heart of the seas, and the flood surrounded me; all your waves and your billows passed over me. … I went down to the land whose bars closed upon me forever; yet you brought up my life from the Pit, O Lord my God.

All the old stories tell of a time when death was the end. When humanity had separated itself from God, and so when they died, they went to Sheol, to the Pit, to the dark place where there was no life and no hope. God strove to overcome this separation, making covenant after covenant, sending rulers and priests and prophets to try to bring the people, back, but nothing worked for good.

And so God went undercover. God became human and walked on earth among us, and as you’ve all heard a million times at Messy Church, God healed people and fed people and raised the dead and preached good news to the poor. And because that good news was bad news for the powerful people, God was betrayed, caught, tried, and executed for crimes against the state.

And then what happened? Well, God was dead – so God went to the place of the dead. To Sheol, the pit, the cold empty place where life and hope were lost.

That’s where we started, tonight. In the darkness, wondering how we got there and whether anything would ever change. But then, something did – a light, and a sound, and we realized that God had not forgotten about us after all.

We sat around that flickering flame and we told all the old stories, the stories about how God made the world and tried over and over again to save it, even when it looked like death had won for good. We heard about water and fire and air and earth, about rainbows and parting seas and vomiting whales and dry bones. And we wondered whether something else was about to change.

And change it did, as the light and the sound that had startled us grew into a great glow and shout of joy, as we realized just who it was who had come to us in Sheol: God’s own self, undercover as just another dead person, but who didn’t – couldn’t – stay dead.

This was God’s answer to all the death and chaos in the stories. Not to give up; not to keep flooding the earth and smiting people until everyone behaved; but to enter into it so fully that God died himself, and took down death from the inside.

And so, following the cross and the flame, we came up out of Sheol, and heard the declaration of God’s victory over death, and found ourselves in the place of light and beauty and joy, where we are welcomed and loved and fed.

So, confirmands, if there’s one thing I want you to remember from this whole weird undertaking, it’s that there’s no place in your life that is too hard, too heavy, too heartbreaking, too awful, for God to come into it and pull you out. When you find yourself in a pit, in a valley of dry bones, in a stinking whale’s belly – and you will; all humans do, sooner or later – remember this night, and remember that inevitably, God will show up in your pit and lead you out.