This is the manuscript as written; it was somewhat more extensive as preached. 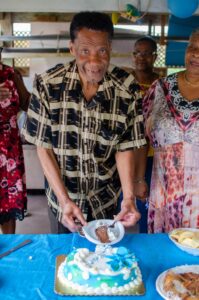 In the eyes of the foolish they seem to have died, and their departure was thought to be a disaster, and their going from us to be their destruction; but they are at peace.

There is so much more to life – and death – than meets the eye.

We are here to celebrate life and resurrection – those of Chelsford Lewis, and those of Jesus Christ. The two are inseparable, of course; each of us is able to rise into new life because Jesus did it first, and Jesus did it not for some abstract idea of humanity but for each of us, in particular.

By his great mercy he has given us a new birth into a living hope through the resurrection of Jesus Christ from the dead.

This is the faith in which Chelsford stood, in which he lived, died, and now rises again.

On the surface, Chelsford lived a very ordinary life. Born in Barbados, he grew up, married and moved to Canada, had kids, worked, went to church, went bowling, retired, and finished his days surrounded by his wife, friends, siblings, children, and grandchildren. But there was more to him than met the eye.

He could fix anything – from cars, to electronics, to (on one memorable occasion) the pedal board of Chris’s organ. He cooked – rice and peas, cassava, and memorable breakfasts for the church Men’s Association. He was a hands-on, nurturing parent, well before it was common to see men cleaning up their children’s messes or taking care of them when they were sick. His facility with numbers not only enabled him to work as a bookkeeper in Barbados, but made him a sneaky and formidable opponent at dominoes.

Dion describes Chelsford as “reserved and private”, mentioning that he saw his father attend vestry meetings but doesn’t remember him speaking much. But Cedric attests that their dad “had a way of reasoning and using pointed humour to ease tense situations.” The words of those who save their words for when they’re most needed, can carry the most weight.

Our Gospel reading today was the Resurrection account from the Gospel of Mark, which is notorious for ending before Jesus actually appears to the women outside the tomb. The angels appear to the two Marys and Salome, and they say, “Go, tell his disciples and Peter that he is going ahead of you to Galilee; there you will see him, just as he told you.” And then, Mark writes, “So they went out and fled from the tomb, for terror and amazement had seized them; and they said nothing to anyone, for they were afraid.” And that’s where it stops.

My preaching professor in seminary had a brilliant take on this text, which was that throughout Mark’s Gospel, whenever the disciples are absolutely scared out of their wits, Jesus shows up. So Mark didn’t need to say explicitly that the women met the risen Lord; they were terrified, so if you’d been paying attention, you would know that the next thing that happens is that they meet Jesus. Mark gets his point across with very few words and very little fanfare, and there is much more to this brief scene in the garden than meets the eye.

Chelsford was not the loudest person in the room, or the easiest to get to know. But he was devout and loving, clever and wise. There was much more to him than met the eye.

We know from St. Paul that where Chelsford is now, with God, he has been reborn into the fullness of resurrected life in God, compared to which his life here on earth was only a seed.

His sons told me that Chelsford told them they were capable of anything and everything in life as long as they stayed focused. He himself was focused on the important things in life: family, church, friends, his beloved home country. And now, he sees God face to face, and is focused on the glory of which he glimpsed a vision here on earth.

When I asked Veta to describe her husband, she laughed and said, “He was something else!” He sure was, and so is God. Resurrection is something else. The promise of new life, in eternity, beyond death, is something else. Let us celebrate it all, today, as we lay our brother Chelsford to rest, in the sure and certain hope of everlasting life, and the knowledge that there is much more – to him, to everyone, and to this life and the next – than meets the eye.

« Reconciliation, then and now
Family feuds »