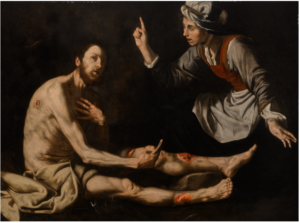 Honestly – I’m tired of this Gospel. (Am I allowed to say that out loud?)

It’s not actually that I want to avoid it, exactly. I love the bit about welcoming children, of course, and I’m intimately familiar with the rest of it from the wrestling I did with it just about exactly a decade ago, when I was in the process of separating from my ex-husband, a step I had never in a million years imagined taking when we married. Like gay people tackling the so-called “clobber passages” that have been used to vilify same-sex relationships; like women clergy reading the prohibitions against speaking in church; like the descendants of enslaved people reading the passages about obeying masters – divorced Christians know these passages inside out. We know the details of the arguments about exactly what marriage and divorce entailed in Jesus’ time, and we have our own responses to particular phrases (some of mine are “sometimes it’s God who separates” and “if you come right down to it, there are worse things than adultery”).

And we can’t help noticing when people who would use this passage as a club, to keep people in abusive marriages or forbid them from entering a new and life-giving marriage while a former spouse is still living, read the parts of the Gospels where Jesus demands that we sell all we have and give to the poor, and then go blithely home to their four-bedroom house in the suburbs in their late-model car.

The Bible is too complicated to serve as a simple rule book. It demands immersion, it demands active engagement, it demands digestion, it demands wrestling. It demands the kind of back-and-forth that we glimpse in the book of Job, where the Adversary (the literal translation of the Hebrew Satan) has afflicted Job despite his blamelessness.

Today’s reading from Job is from the second chapter of the book, and we will hear more in the coming weeks (although not next week, when we use the readings for Harvest Thanksgiving). In the first chapter, the Adversary took Job’s wealth and the lives of his children and servants. In today’s reading, he followed that up by afflicting Job directly, on his body, with “loathsome sores”. All of this to test his devotion to God, his “blamelessness,” and to see whether he will give in and curse the Almighty at being struck with all this meaningless and undeserved suffering.

Job is one of the longer books in the Bible, 42 chapters, and so we only skim its surface in this handful of selections from the lectionary. The whole thing is a profound wrestling with questions of good and evil, power, suffering, and human limitations. Over and over again, Job is described as “persisting in his integrity”; both by God in the conversation with the Adversary, and then by Job’s wife as she confronts him while he scratches his sores on the ash heap. “Do you still persist in your integrity?” she asks him. “Curse God, and die.”

Although I don’t read Hebrew, the commentaries tell me that in many texts, Job’s wife is actually depicted as saying, “Bless God, and die,” because the mere concept of cursing God was so horrifying that the text was emended to avoid using the phrase. But Job is not a book that shies away from the messy depths of human experience, or discourages human beings from contending with God. God may terrify Job with the majesty of the divine presence, but God nevertheless spends almost four chapters replying to him in detail!  Job can retain his integrity and question the ways of the Almighty.  There is a lot of room between giving up and cursing God, and unquestioningly blessing God even in the midst of catastrophe.

One of the questions that interpreters have been asking of the book of Job for more than two millennia is whether it’s even possible for someone to be as genuinely “blameless” as Job is described to be. Is the whole thing just a parable, setting up the ideal of the human being who is free from sin and then proceeding to question it? Is Job just very, very good, though not actually perfect? Do these categories even make any sense when applied to an ancient Hebrew text?

But it occurs to me, when Jesus gives the Pharisees who have come to “test” him his strict interpretation of the ongoing Jewish legal debate about divorce, that he is demanding, in this interaction, almost this same degree of “blamelessness” from his hearers. At the end of the conversation, both the portion with the Pharisees and then when Jesus explains again to his skeptical disciples, we are left with an answer that demands the uprightness of Job – a degree of rectitude that even Job was ultimately unable to sustain!

And more to the point, Job being “blameless and upright” is only the beginning of the conversation, not the end. Say you are the person reading this passage and considering, in fear and trembling, whether to stay in a marriage – a set of decisions that, I might add, is almost entirely different from making that decision in Palestine in 30 AD, however similar the situation and vocabulary may be on the surface. You, like Job, deeply wish to preserve your integrity – not in the sense of seeming blameless to your friends and associates, but in the sense of retaining your wholeness as a human being. You may feel just as battered and bruised by your circumstances as Job did by his, sitting on the ash heap and mourning his dead children. It may feel like God has given “the adversary” permission to destroy your life in order to test you. What do you do?

I think the most essential answer to that question is, like Job, you keep wrestling. Like Job, you roll your eyes at the so-called “friends” who come to you offering easy answers and refusing to just sit with you in your pain. Perhaps, like Job’s wife, you consider cursing God – or blessing God. Perhaps you hear the voice of God pointing out to you just how small you are and how little you know. But, stubbornly, insistently, you retain your integrity, you retain your determination to speak, to make meaning out of your situation, and to offer your experience as evidence before the divine tribunal.

Jesus quotes Scripture saying “Therefore what God has joined together, let no one separate.” And that may have been the best way to uphold integrity and protect the vulnerable, especially women and children, in his time and place! Dorothy L. Sayers, in the introduction to The Man Born to be King, says, “Jesus, who dealt gently with publicans and sinners, was hard as nails about the lofty-minded sins”; and perhaps in that context, divorce was a “lofty-minded sin” perpetrated by those with power against those without. Jesus refers to “your hardness of heart”; I know that my heart was not hardened, it was broken.

But I can’t help thinking that even more important than not letting humans separate what God has joined together, is not letting humans separate ourselves from God. Job may not have blessed God or cursed him, but he didn’t abandon God. He kept asking, kept seeking, kept besieging heaven with his prayers and complaints and imprecations. And despite the texts in scripture that could easily drive them away – and have driven many away – nevertheless many LGBTQ people, divorced people, women called to ordination, and descendants of the enslaved, have stayed in the church, stayed in relationship with God, kept praying and studying and interpreting and questioning, because these texts, and the God that they however imperfectly reveal, are too important to let go of.

When Jesus asked his disciples whether they would turn back and no longer go about with him, they replied, “Lord, to whom shall we go? You have the words of eternal life.” It’s not comfortable, but we persist in our integrity, in claiming both our relationship with God and our own wholeness. Refusing to be put asunder from God, continuing to wrestle with the words of the divine and – like Jacob with the angel – refusing to let go until they bless us.