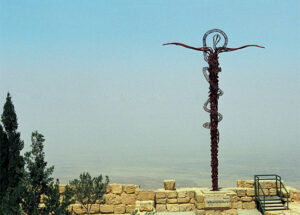 It feels like a dead end. We’ve been walking in circles in the wilderness for forty years – for literally my whole life. My uncle Aaron has just died – struck dead by God because he disobeyed at the waters of Meribah – and my uncle Moses is clearly exhausted, used up by the burden of leadership and the people’s complaining. Nobody knows what the endgame is, how we’re supposed to pull ourselves together and get to where we’ve been promised that we’re going. Most people seem to have forgotten that life consists of anything but complaining about the food, about the endless repetitive work of making and breaking camp, about the heat and the dust and how annoying their neighbours are. God’s chosen people? What a joke.

Them complaining about Moses is nothing new, but this is the first time they’ve dared to complain against God. And so guess what, now God has sent poisonous snakes into the camp and people are dying left and right. Serves them right, they weren’t going to learn any other way. Now apparently Moses has been told to make a bronze serpent and put it on a pole so people can look at it and be cured. As far as I can tell he’s completely lost the plot. Is he really listening for God anymore? Or is this coming from his own desert-addled brain?

Ow! My foot! What in God’s name? The snakes weren’t supposed to bite me! I’m one of the only ones who actually knows what’s going on here!  Oh no, oh no, oh no … is the bronze image finished yet?  Am I going to be able to look at it before I die?  I don’t care how or why it works, as long as it does! God, help me!

Once again I thank God for the gift of his faithful king Hezekiah, just and righteous beyond his years, who obeys the law of God and does not cleave to the idol-worshipping ways of his fathers. I record in this my chronicle his destruction of the graven images with which Judah has sinned. Today he broke in pieces the bronze serpent that Moses had made, which the people called Nehushtan and to which they were accustomed to make offerings, in violation of the first commandment of the Lord to Israel. We know that God instructed Moses to make this image for the people’s healing, but in the following years it was misused and worshipped in place of the One God, to whom alone our worship is owed.

As the priests pulled down the idol, the temple singers chanted from the Psalms of David:

Some were fools and took to rebellious ways; *
they were afflicted because of their sins.
They abhorred all manner of food *
and drew near to death’s door.
Then they cried to the Lord in their trouble, *
and he delivered them from their distress.
He sent forth his word and healed them *
and saved them from the grave.

In seeking healing in the wrong places, the people had rebelled against God and broken his commandments. The bronze serpent Moses created to heal them had become the agent of their destruction. Today, Judah has been brought back to the source of true healing, the one and only God of Israel, the Holy One.

I’m still trying to figure out what he means when he says we will be saved. From what? When? And how?

The people who crowd around him, begging to be healed, know what they want. They want to be fixed, to be cured. They want the bleeding to stop, the leg to be straight and whole again. They want no more fits or attacks or melancholy. And more often than not, they get it.

I mean, I know how that feels. I’m the one from whom he drove out seven demons. And I rejoice every day that he did. But looking back I laugh at myself when I think of how I thought that once I no longer had those voices gibbering in my head, somehow everything would magically be better. No – it was getting rid of the demons that made me realize that nothing else in my life was OK either, which was why I chucked it all and started following him.

And he heals the people, the blind ones and the ones with fits and the bad legs, but he’s constantly trying to get across to them that that’s the beginning, not the end. It’s not just about their individual aches and pains. There’s something that he has to offer to the whole world – something that’s like the physical healing, but so much bigger and more important.

Today he told us about meeting with Nicodemus in the middle of the night, and how he told him about being lifted up like the serpent in the wilderness, and God loving the world so much that he gave his only son to save it.

I think I have a sense of what he’s getting at. That the serpent that Moses made was for healing bodies, when people were bitten by poisonous snakes. But when Jesus is lifted up, it will be to make everything better, to make everything new, not just our bodies. And to do it for the whole world, not just one person at a time.

But how will that happen? How can he be lifted up so high that the whole world can see him? That’s what I don’t understand at all.

I’ll do it, but I don’t have to like it. With my history, every time I see a hypodermic needle it’s like I’m right back there, in the hospital with the ports and the beeping machines and being woken up every couple of hours to have something stuck in me to put medicine in my veins or take blood out of it. I don’t understand why healing has to hurt so much.

In some ways this year has been a gift, because I’ve been able to do a lot of thinking. I haven’t had to give any excuses for why I was too sick or too depressed to leave the house. I’ve been able to work through a lot of stuff. I mean, yes, of course, it’s been hard for me in all the ways it was hard for everybody else, but there have been silver linings.

And now, with the vaccine finally on the horizon, I’m realizing that it’s going to be just as much of an adjustment coming out of lockdown as it was going in. I’m not the same person as I was then. I understand a lot of things about myself that there was too much noise and busy-ness in my life to understand before. And I understand a lot of things about the world, too. Like, we have a vaccine for the virus, but when are we going to get the vaccine for racism? Or for selfishness?

I feel like we’re all holding up this giant image of a syringe, and putting all our expectations on it to save us. But there are a lot of things we still need saving from, you know?

So yes, of course, I’ll get it. But it will sting. There doesn’t seem to be a way to get around how healing hurts.

And there’s so much in the world that still needs to be healed.