Lent I, Year B 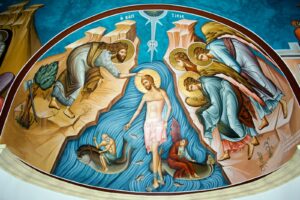 In those days Jesus came from Nazareth of Galilee and was baptized by John in the Jordan. And just as he was coming up out of the water, he saw the heavens torn apart and the Spirit descending like a dove on him. And a voice came from heaven, “You are my Son, the Beloved; with you I am well pleased.”

About this passage, the New Testament scholar Stanley P. Saunders writes: “Jesus’ baptism marks for him the end of the old world and the beginning of a new one, as is made clear as soon as he arises from the Jordan and sees the heavens themselves being torn apart. The image is both violent and hope-filled. The only other place Mark uses this word for ripping and tearing is in the description of the events that take place at the moment Jesus dies on the cross, when the veil of the temple is torn in two, from top to bottom. … These are both high apocalyptic moments, when the boundaries between earth and heaven are disordered and dissolved. … The descent of the Spirit signals that God is now remaking the broken, sin-filled creation.”

“When the boundaries between earth and heaven are disordered and dissolved.” In the ancient world, those boundaries were rigid and important. God was above, in the heavens; living people were on earth; the dead were below, and never would the three meet.

This same kind of boundary-breaking appears in the Epistle reading from I Peter.

This passage is, admittedly, a bit hard to understand.  It might perhaps be kindest to describe it as “free-associating.”  The writer hops from one idea to another, so excited to think about God’s saving power that he manages to skip from the Resurrection, to “the spirits in prison”, to Noah, to baptism, in about a sentence and a half.

Volumes of commentary have been written on this passage, and it’s still not at all clear what the original writer intended to describe when he referred to “the spirits in prison”, or what the nature of Jesus’ “proclamation” to them is.

By about 200 years after the Crucifixion, though, the consensus was clear:  the patristic writers – the leaders and theologians of the early Church – agreed that this phrase, among others scattered throughout the New Testament, referred to an event variously known as the Descent Among the Dead or the Harrowing of Hell.  Jesus, they concluded, between his death and resurrection, went to the place where the faithful people of past ages were gathered, and brought them out of the silence and darkness of Sheol into the light of resurrection.

As Cyril of Alexandria wrote, commenting on this passage:  “Going in his soul, he preached to those who were in hell, appearing to them as one soul to other souls.  When the gatekeepers of hell saw him, they fled; the bronze gates were broken open, and the iron chains were undone.  And the only-begotten Son shouted with authority to the suffering souls, according to the words of the new covenant, saying to those in chains: ‘Come out!’ and to those in darkness: ‘Be enlightened!’.”

Icons of this ecstatic moment show the gates of hell knocked off their hinges – reminiscent of the tearing open of the heavens – and lying on the ground in the shape of a cross, while over them Jesus reaches out his hand to Adam and Eve, Abraham and Sarah, all the people of the covenant who have been waiting, in darkness, for thousands of years.

Here are the rigid boundaries between earth, heaven, and hell:  even the righteous people of the Old Covenant have been, until this moment, cut off from the presence of God.  And here is the imagery of the tearing open, the rending of the veil between one world and the next, because God in Jesus will not let any of his beloved be left behind.

As we begin Lent, the season of renewal and rededication to God, we are reminded of the lengths that God will go to in order to bring us back from our sin and brokenness, even tearing down the barriers between worlds in order to find us and bring us home.

In our own baptisms, we echo this same profound and life-changing movement. Plunged beneath the waters, we die to our old lives and are reborn. Rising out of the waters of death, we hear God’s voice affirming that we are beloved; we receive the Spirit; and we see a glimpse of the new and eternal life into which God invites us, as the barriers between the worlds are torn back.

It is not necessarily a comfortable experience; birth rarely is. At the same time that the cosmos is turned inside out, so are we. After all, the first thing that happened to Jesus after he came up from Jordan’s water was the temptation in the desert.

This year of pandemic lockdown has felt a lot like an extended sojourn in the wilderness. As we have been denied much of our ordinary daily activities and distractions, and forced to focus on the big questions of life and death and morality, perhaps it has felt like worlds are colliding and collapsing, even as we are confronted with the limits of our own power and our dependence on God.

And in the midst of all this, we have to have an Annual Vestry Meeting.  This routine administrative task would seem like the very antithesis of the cosmic themes – life, death, rebirth; earth, hell, heaven – in these readings.

And yet, gathering – even via Zoom – to take stock, to remind ourselves of our mission, and to set apart leaders for the church, is part of our baptismal life together. The mundane tasks of agendas, minutes, and votes, underpins our ministry. Supported on that firm foundation, we are able to come together to contemplate the great and cosmic things of God, to be reminded of our belovedness, to travel through the wilderness to the abundant life waiting on the other side.

In our baptism, God claims us and names us as God’s own. In tearing open the veils and breaking down the walls between worlds, God insists on leaving no one out of the invitation into a new and resurrected life.

That is why we are here, why we bother gathering together and showing up for each other, why we listen to God’s word and (when we are able) share in God’s sacraments and reach out in love to God’s world.

And this Lent, we joyfully anticipate that as soon as we are able to gather again, we will observe an extended season of baptismal celebration, welcoming many new Christians into this barrier-breaking, cosmos-changing new life. Serena Capplette and her daughter Coralie Trepanier are actively preparing for baptism even now; and no less than nine children of various ages may join them in the following months!  As we pray for those preparing for baptism, let it be a time of renewing our own resurrected life.

Once and for all, in Christ, heaven has broken into earth, hell is harrowed, and all of us are brought joyfully home.

« Lenten hope
Seven kinds of rest for the seventh day »