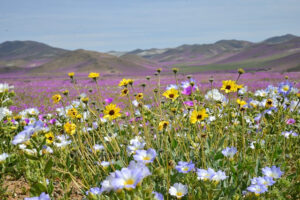 The “superbloom” in the California desert, Spring 2019

It is very tempting to simply stand up here, play the second movement of Brahms’ “German Requiem” and sit down again. For those not familiar with one of the greatest choral works of all time, the text for that second movement includes verses from both our Isaiah and James readings for today, and sets them to glorious music that depicts the pain of exile, loss, and alienation, James’ invitation to patience and hope, and then the overwhelming burst of joy when the ransomed of the Lord return to Zion with singing.

And for most of us, I think, these readings would indeed seem to be among the most cheerful and hopeful of the Advent scriptures.  No terrifying visions of apocalyptic doom here; instead, we are given visions of redemption and homecoming, exhorted to patience and faith, and assured that the answer to John the Baptist’s question is “Yes”: that Jesus is, indeed, the one chosen by God to deliver the people, and that this can be proved from the deeds of power that he is doing among them.

After all, isn’t that the best possible proof that Jesus is the Messiah, the Son of God?  As prophesied in Isaiah, he brings sight to the blind and hearing to the deaf; the lame walk and leap. In Isaiah, the mute also sing for joy; Jesus, in addition, heals lepers, raises the dead, and brings good news to the poor. It certainly sounds like everything that is wrong with the world is being set right.

And yet, when you start to ask what we should actually do with these texts, today, in 2019, two thousand (or more) years later, you immediately trip over two interrelated issues.

One is probably a question you’ve asked yourself before: why should a handful of people who actually encountered Jesus in a particular place and time have been able to receive the benefit of his miraculous powers of healing, while the rest of us have not?  Certainly there have been miraculous healings since then, some of them as a direct result of prayer to Jesus.  And yet they remain most definitely the exception, and not the rule.  Following the way of Jesus does not guarantee wholeness and health.  Healing power has not been reliably transmitted from Jesus and his apostles to their successors through the ages.

On the other hand, conversely, these lists of ways that people can be changed or cured by God’s power don’t always sound like the promise of good news to some who are actually living with these conditions today.  The emerging field of disability theology is actively reckoning with the role of healing in Jesus’ ministry, and for perhaps the first time, much of the work is being done by actual people living with disabilities, bringing a new voice and perspective to the conversation.

And what they are saying is:  the blind don’t necessarily want to be given their sight, or the deaf their hearing; those who can’t speak words aloud, or whose legs don’t work like “normal” people’s, may be just fine with what their bodies can do; what they need is to be treated as full human beings, with the rights and accommodations they need to thrive. Deaf people, for example, have a full-fledged culture of their own, with its own languages; many have no interest in being “fixed” to the dominant culture’s standards of normality.

And in fact, when Jesus is about to heal someone in the gospels, he very frequently asks them, “What do you seek?” or “Do you want to be made well?” Which seems like a ridiculous question – of course the person would want to be healed of their epilepsy, or paralysis, or hemorrhage! – but the fact that Jesus takes time to ask it indicates that he acknowledges the autonomy and personhood of the person in front of him, rather than just seeing them as a malfunctioning body to be fixed.

Many disabled people, if told that their entrance into the Kingdom of God is contingent on their disability being magically removed by God, would be deeply offended. They would see that – and rightly so, I think – as indicating that there was something about their current condition that made them unacceptable to God.  And of course, we believe the exact opposite: that there is nothing whatsoever that can separate us from God’s love.  Just because someone’s body doesn’t work the same way everyone else’s does, does not make them any less a beloved child of God – and of course that is also the case for so many of the other differences so often used to separate us, from race, colour and gender to sexuality, class, and language.

So where does that leave us as we contemplate walking on Isaiah’s Holy Way?

In the ancient world, disability meant exclusion: either because it was seen as a sign of God’s disfavour, or simply because being blind, lame, or otherwise handicapped meant you couldn’t contribute economically. This is why so many of those whom Jesus encounters and heals are beggars. Their healing empowered them to return and take up their place within the family, household, and society.

But what if, rather than the pattern being “broken humans go to God to get fixed,” we see it instead as “God comes to us and removes all barriers”? What if our job, as God’s church, was not to pray and work to fix everyone, but rather to work on the road, to make it possible for everyone to travel on it equally?

I don’t know what that would look like, and I’m teetering perilously between the literal and the metaphorical right now, but what if we imagined a road full of people moving joyfully in the same direction even though some of them are walking and some are in wheelchairs, some can see and some can’t, some speak and some don’t.  And this is possible both because they are helping each other, and because the road is designed to work for everyone, not just those who conform to an arbitrary standard of physical capability. Everyone is affirmed and embraced for who they are, not forced to change in order to be included.

After all, the only qualification in the text is that the road is for “God’s people”, and the only way to be rejected from it is to reject God’s will for the journey.  Even the “fools” (which is most of us, most of the time!) will be safe on the road, not going astray as long as they stay focused on the goal, on the glorious homecoming that awaits them.

And of course this is not just about the disabled people who are the ones specifically referenced in the text.  It’s about anyone whose identity diverges from the so-called “norm”. It’s about understanding that God listens to people before fixing them, that healing and curing are not the same thing, and that wholeness has nothing to do with conformity – in fact, it is its opposite.

Jesus brings good news to the poor – and to everyone else – and that news is that their identities are holy and affirmed by God.  Whether disabled, neurodivergent, LGBTQ, Indigenous, or any of the other innumerable groups who have been cast out and shamed simply for being who they are, God says not, “Become an able-bodied middle-class straight white person and then you can worship me” but “You are my beloved child; welcome home.”  God is spectacularly uninterested in making people the same. As C. S. Lewis wrote: “How monotonously alike all the great tyrants and conquerors have been; how gloriously different are the saints.”

« There is life after Christmas
Why Christmas pageants? »