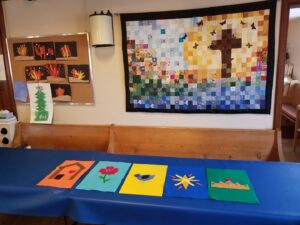 Banners to be used during the pageant, made by Grace last week.

This coming Sunday is the Christmas pageant, which will be presented during the 10:00 service. (Fear not, those who come to the 4 PM on Christmas Eve will still have the chance to put on a costume and participate in the manger tableau!)

Christmas pageants are a beloved and popular part of many churches’ traditions, but if we stop to think about it we may wonder, why do we choose this particular piece of our faith story to dress up small confused children as Bible characters and make them sing songs in front of the grown-ups? What is it about this story, in particular, that inspires this kind of response?

I don’t know anything about the history of church and school Nativity plays, but I think we tend to gravitate toward the Christmas story because it is so clearly focused on the idea of God coming to live with us.  There is something particularly compelling about playing the parts of the people (and angels, and animals!) who actually got to witness, in person, the birth of God into the world in a manger in Bethlehem.

Pageants are perhaps the most powerful available form of Christian formation for children (and adults too, when they participate!).  There is nothing like literally getting inside a story, dressing up as a character and acting out what happens, to make it stick in one’s head and one’s heart.  No wonder that one of our most important stories is one that we convey to our children in this way, year after year.

The children who are performing in our pageant on Sunday are already learning songs by heart (even though it’s not required!) and the words of the prophets and gospels, and the symbols and actions of the script, will become part of them as well.

That being the case, we want our pageants to be not just occasions for the kids to dress up and impress everyone with how cute they are, but solidly based in scripture, as food for thought and prayer for both those who are acting and those who are watching.

And who knows – perhaps we should think about doing some pageants at some other time than Christmas!

I hope to see you for the Pageant on Sunday!

« On the Holy Way together
Only the beginning »