Baptism of Christ, Year A 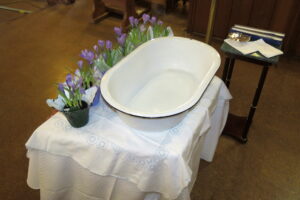 The font prepared for the baptism of Amelia Cyr, Easter Sunday, 2022

John would have prevented him, saying, “I need to be baptized by you, and do you come to me?” But Jesus answered him, “Let it be so now; for it is proper for us in this way to fulfill all righteousness.”

“For it is proper for us in this way to fulfill all righteousness.” Nobody really knows what Jesus meant by this saying. And sometimes we are equally baffled when we really think about what we’re doing when we baptize people.

What does baptism actually do? And why does it matter? How can we “fulfill all righteousness” when it comes to this central sacrament, about which we have such strong and sometimes contradictory feelings?

Baptism has many meanings, literal and symbolic, which complement rather than contradict each other. It makes us Christians; it brings us into the Church, the family of God, the community of saints. It washes us free of sin. It echoes the ancient and current water purification ceremonies of Judaism, in which submersion in a sacred pool is associated with ritual cleanliness and various life transitions, large and small. And it is a reenactment of our physical birth and a prefiguration of our physical death, united in the symbolism of our burial and resurrection with Christ.

For a certain kind of church person, though, the answer is much simpler: Baptism saves you from going to hell.

That’s not the Anglican Church’s perspective or my own, though. And this isn’t some kind of wimpy modernist answer: in the early fourteenth century, Dante put several unbaptized people in his Paradise, while of course most of the people he put in the nine circles of his Hell were baptized Christians who had sinned grievously and unrepentantly after their baptism.

Ironically, I think that the concept of baptism as “fire insurance” has contributed to the overall cheapening of the concept of baptism that has been a feature of the last few hundred years of Christian history. If you MUST be baptized or you’ll burn, then the only important thing is that the baptism happens, basically like a magic spell, and divorced from anything that happens before or after in the person’s life. This leads to the unfortunate phenomenon of “getting the baby done” just to keep Grandma happy, with no intentions of meaningful participation in Christian life or a church community – or, even worse, to situations where parents who have actively chosen not to be Christian can’t leave Grandma alone with the baby or she’ll baptize him in the kitchen sink against their express wishes. (You may chuckle, but I know people who have been in this exact situation.)

The church has tried very hard over the last couple of generations to convince people to see baptism less in this regard – or simply as a nice thing to do as an acknowledgement of a major life event – and instead to see it more as it’s seen in the Acts of the Apostles, the source of our second reading today: as a transformative, radical event, accompanied by the outpouring of the Holy Spirit, and utterly changing the entire subsequent course of one’s life.

This is somewhat difficult to manage in a context in which infant baptism is still the norm, though, and more to the point, in which Christianity is a faith trying to extricate itself from a millennium and a half of corrupting cultural dominance, rather than a brand-new, explosively growing, exciting (oh, and illegal) countercultural movement.

We could attempt to solve this problem by going back to believers’ baptism, as many churches have – restricting baptism to those who are old enough to make a conscious and articulate profession of faith.

But in the historic liturgical churches, of which the Anglican tradition is one, we have two thousand years of tradition in which baptism is required before receiving communion. In recent years, we have removed all the other barriers to communion – you no longer have to be confirmed, or to have reached a certain age, or to be formally “prepared” to receive communion. I strongly encourage the parents of babies and toddlers who are baptized to let them participate in communion immediately, at the same service. Baptism and communion are the two primary sacraments, the ones we are commanded to observe by Jesus himself in the Gospels, and in this way they are intertwined and interdependent. Baptism constitutes the family of God; Eucharist is the celebratory meal of that family.

In recent years, there has been a movement in various parts of the church to go even further, and to allow anyone to receive communion, whether they have been baptized or not. You may have noticed that, since we returned to sharing the Eucharist after lockdown, I have been saying specifically that “all baptized Christians are welcomed and encouraged to receive the bread and wine” rather than any broader or more general welcome.

Over the past couple of years, I have been forced to confront what I really think about the connection between baptism and communion, and I have realized that as much as I understand the impulse to welcome everyone to the table without any barriers, I cannot in conscience knowingly administer communion to the unbaptized or encourage them to receive it, because theologically, I don’t know what’s happening when I do so. In baptism we die and rise again with Christ; in the Eucharist, we literally feed on Christ’s body and blood. The one makes the other possible. I do not discount the powerful stories of those who have encountered God in the Eucharist while still unbaptized, and if I discover that that has happened to someone in a service where I have presided, of course I don’t rebuke the person; I simply offer them baptism (and encourage them to abstain from communion until it can happen).

There is a great deal more I could say on this subject that doesn’t fit in a Sunday morning sermon, but I’ve found the topic coming up surprisingly often lately, so I wanted to lay out clearly and in public why my practice is what it is.

Baptism is real. It means something.  For the early church, it was often impulsive and immediate, accompanied by an outpouring of the Holy Spirit, and represented a total reorientation of one’s life. For centuries after that, it was seen primarily – in the folk understanding, at least – as a necessary ritual to ensure at least the possibility of salvation and avoid certain damnation. Today, we are reinventing our understanding once again, and trying to reclaim some of that excitement and countercultural commitment that Cornelius experienced when Peter baptized him and his whole household.

Baptism is what makes us into the family of God, able to gather with Christ around God’s table. “It is proper for us in this way to fulfill all righteousness.”

On this feast of the Baptism of our Lord, take some time to reflect: what difference has your baptism made for you?

« The cry of transformation
Funeral sermon for Sylvia Forbes Tomsons »