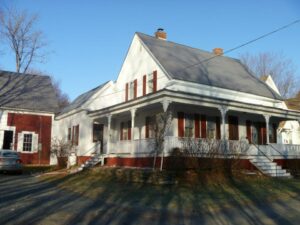 The farmhouse in New Hampshire.

Sometime in the middle of next month, I will have lived in my current apartment for longer than I have ever lived at any one address since I left home for university in the late summer of 1996.

It still boggles my mind occasionally that my adulthood has been so peripatetic, because my childhood was extraordinarily stable. My parents have had the same zip code and phone number since 1972. They brought me home from the hospital to a rented apartment, then bought their first house when I was 3, and the house that they still live in when I was 9.

It wasn’t my plan to move around so much as this stage in my life; I bought a house when Peter was 3 that I hoped to stay in for many years, if not decades. But the job in that town came to a messy and premature end, and we had to move on. In January of this year, Peter will have been at Lakeside Academy for longer than he’s ever attended one school before in his life, and I’m deeply grateful for that increased stability.

Because I’ve moved so much, though, I haven’t had much chance to accumulate possessions – at least by the standards of developed countries in 2022. So I have a peculiar mix of feelings when I read today’s passage from Luke’s Gospel. On the one hand, I know that by any historical standard, I am extraordinarily rich, comfortable, and privileged, and that I could do a lot more to help those who are none of those things. On the other hand, I feel like I do actually have a fair amount of experience of what it means to “travel light for Jesus,” and the older I get while still renting an apartment that’s more or less the same scale as the one I lived in in grad school, the more this feels actively countercultural.

And during the four years that I lived in a house that I (theoretically) owned, with the big garden and the chicken coop and the pellet stove and everything I had been dreaming about for years, I was acutely aware of – as I phrased it at the time – “the spiritual danger of getting almost everything you want.” If your life corresponds too closely to your fantasy of the perfect existence, one or both of the following things is very likely to be true: either you will be sufficiently contented that you start to forget about God and the needs of your neighbours; and/or, it will be very difficult to accept when the Holy Spirit is calling you onward to something else.

Since I have clinical anxiety, in my case it was mostly the latter. At the end of those four years, God had to peel each of my fingers slowly and painfully out of their death grip on the status quo, before shoving me in a new and unexpected direction that contained challenge and difficulty, yes, but also extraordinary and unanticipated joy.

Jesus uses very strong language in this passage, calling his disciples to “hate” (the Greek is miseo, from which we get words like “misanthrope” and “misogyny”) their families, and give up all their possessions. One of my colleagues this week says he’s writing a sermon in which his main point is that “if all of us fail so thoroughly by this standard, Jesus must love us an awful lot to be willing to overlook it”. I suspect that part of the reason for this exaggeration is simple rhetorical strategy: if Jesus says X+100, maybe he can actually persuade people into accepting X.

So – since Jesus doesn’t actually seem to expect people, in practice, to hate their families; witness, for example, his deep friendship with all three of the Bethany siblings, Mary, Martha and Lazarus – if that’s the case, what would X be? What is supposed to be the visible difference between disciples of Jesus and everyone else, on this question?

I think most of us understand, at some level, that riches and possessions are morally dangerous. But the family? Isn’t that supposed to be one of our major commitments, one of the primary focuses of our lives? Surely blood is thicker than water, charity begins at home, and so on?

So frequently when I’m preparing to officiate a funeral for someone, especially someone I don’t know well and so I have to learn what they were like from their spouse, siblings, and children, the first thing that people say is, “Family was everything to her.”

People often describe their churches as “like a family”, but in recent years, people who analyze community dynamics have pointed out that families are frequently dysfunctional – and regardless of their functionality, are often quite difficult to really join. And thus, perhaps not the best model for an entity that actively wants to promote virtue and healthy community, and make it easy for newcomers to become members.

Those of us who have happy, loving families should absolutely rejoice in that as a gift of God. But so many families deform and traumatize their members via generational patterns of abuse. Some people have no choice but to cut off their family members in order to live healthy, content lives.

One of the gifts that the LGBTQ+ community has given the world since it has been able to come out of the closet over the past half century or so, is the concept of “found family” – that friends, partners, neighbours, and other people not “related” in the traditional manner can be just as loyal, loving, and central to each other’s lives as the more familiar kinds of family. It is to be mourned that in many cases the impetus for creating found family in queer communities is their rejection by their blood family; but nevertheless, the model of expanding care and kinship beyond the nuclear family is a valuable one.

My experience of family over the past decade or so has been similar to my experience of earthly possessions like real estate: in that I expected to have a lot more of it by now. My parents have three daughters, but only one living grandchild, and the two of us who have married have both since divorced. My son has no living first cousins. If having a big, thriving family were the yardstick of success and virtue, we wouldn’t be doing very well. Some cultures might even consider us cursed. I’m not particularly bothered on that front, but of course I deeply mourn the broken relationships, and especially the absence of my sister’s two little boys, lost even before birth.

And I think that is where we need to begin in responding to this passage from Luke. Jesus is, at the very least, categorically rejecting the idea that the number and quality of one’s kin or one’s possessions was somehow indicative of one’s worth as a person. None of that is remotely relevant in the kingdom of God.

It’s hard to overstate how revolutionary this was in a society in which sheer survival, let alone status and security, were predicated on being part of a functioning household, whether as kin, client, or slave. (And this is the context in which Paul writes to Philemon, begging him to bring his wayward slave back, not as a slave but as a brother in Christ.) With one stroke Jesus has demolished the entire system by which people sorted themselves into categories in the first-century Roman Empire. In its place Jesus offers the alternative household – the “found family” – of the Kingdom of God, united by its membership in the Body of Christ through baptism, and by the radical sharing of resources embodied in events like the Feeding of the Five Thousand.

So, if we have happy, loving families, instead of seeing them as proof of our own virtue or as the ultimate goal of life, let us see them as laboratories for faith, as a symbol pointing beyond itself to our true kinship, which is in God.

And if we don’t have such families, let us rest in Jesus’ assurance that the most lasting relationship is the found family of our siblings in the Body of Christ.

And whatever our relationship to our possessions, let us be always conscious that our real treasure is in the kingdom of God, where the vagaries of earth cannot take them away from us; where we never have to move house; and where there is always enough, and more than enough, for all.

« Cracked cisterns, new wineskins, and seats of honour
Who are the lost? »