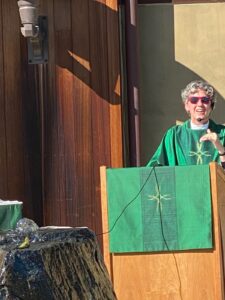 For those of you who can’t see the picture on the screens right now, it shows my colleague Tracy Wells Miller – coincidentally, wearing the same green vestments that we use here – presiding at an outdoor service at the end of January (she lives near Santa Cruz, California, where this is a thing that is possible.) In the foreground is the church’s baptismal font, and perched on the edge of the font is a hummingbird.

Tracy writes about this picture:

Thanks to Nelson Crandall for capturing this image of a hummingbird taking a bath in our baptismal fountain while I preached this morning! A very St. Francis moment!

(The hummingbird flittered over and took a few sips out of the fountain during announcement time before the service, and I said, “Hello, little hummingbird, whoever you are … you’re bringing someone’s spirit to us, I’m sure” – because it seemed very serendipitous, like someone sending us a message from the beyond. Later, when I shared this image with my parents, my mother said maybe it was my paternal grandmother [who I called “Mom,” who died in 2012] dropping in for a visit, since she loved hummingbirds.)

Those of you who have regularly attended All Saints’ parish meetings over the last three years probably know where I’m going with this.

At one of those meetings, in the spring of 2019, we were discussing the interrelated issues of where to put the elevator, which had not been installed yet, and what to do with our surplus of baptismal fonts after the parish merger. We’ll be talking more about this in today’s meeting, and I have a rough timeline of events to share with you then. But today I want to focus on one simple sentence that was uttered on that occasion; on my response to it; and on how it has become a flashpoint ever since.

The sentence was, of course, “We could put the stone font outside as a birdbath!” And my response was something along the lines of, “Oh yes, that would be delightful!”

I genuinely don’t remember who first said it. And I probably should have realized, before opening my mouth to reply, what the reaction would be. But I was just so charmed by the image, and by its immediate resonance with the verse of the Psalm we read today: “The sparrow has found her a house and the swallow a nest where she may lay her young; by the side of your altars, O Lord of hosts, my King and my God.”

(Full disclosure: this is not the Psalm assigned for today. But don’t worry, I asked the bishop’s permission to change it.)

As it happens, it has become clear in subsequent conversations that in our climate, putting a stone font outdoors as a water vessel is not going to work as nicely as it does for Tracy and her parish in Aptos, California. Repeated thawing and refreezing cycles would likely cause it to crack and disintegrate eventually, and it could breed mosquitoes in the summer. So we have, in fact, abandoned the suggestion in practical terms (again, more on that at the meeting).

But the principle is important enough that I wanted to address it head-on, before we move on. (Incidentally, if you’d like to follow along as I refer to the Psalm, it’s in the green book on p. 817.)

Sacred space and sacred objects are important, as the Psalm makes clear from the very first verse: How dear to me is your dwelling, O Lord of hosts! My soul has a desire and longing for the courts of the Lord; my heart and my flesh rejoice in the living God. … For one day in your courts is better than a thousand in my own room, and to stand at the threshold of the house of my God than to dwell in the tents of the wicked.

But the Psalm does not set up an opposition between sacred space and the rest of the world. Instead, it immediately begins drawing connections between God’s house and the rest of God’s creation. The sparrow and swallow nest beside God’s altars. “Happy are the people whose strength is in you! whose hearts are set on the pilgrims’ way” – and those people are as much in God’s presence and protection on the pilgrim’s way through the wilderness, as they are within the temple itself; as described in the following verse, they go through the desolate valley and, by God’s grace, find it a place of springs; they are able to refresh themselves with living water.

It is not our job, as church people, to close ourselves up in our buildings with our sacred objects and defend them from the pollution and corruption of the outside world. It is our job to be continually, tirelessly, drawing connections between this space and the rest of the world, as we worship a God who literally became flesh in order to overcome the separation between God and God’s creation.

We should have sacred spaces and sacred objects. But they are not museum pieces. They are symbols that only have meaning and power when put in dialogue with the reality of God’s beautiful, hurting world; when, as the Lutheran liturgical theologian Gordon Lathrop puts it, they are broken open, shared with the world that is longing for an icon of God’s love.

(I don’t mean literally broken. I do intend for the font to stay in one piece from now on. Lathrop’s idea of the “broken symbol” comes, of course, from the broken communion bread, which in turn echoes the broken body of Christ, given for the world, and which in breaking becomes something far greater than itself.)

And so I want to share with you a second picture. This was posted on Facebook in late February. The celebrant is identified only as a priest of the Kyiv Archdiocese, and no specific location is given. But the context is clear: the Eucharist is being celebrated in a basement, very possibly under actual bombardment, during the initial Russian Army drive toward Ukraine’s capital. One of the other pictures in the set shows the congregation, people of various ages including children, bundled up in heavy winter coats and with fear in their eyes as they pray. 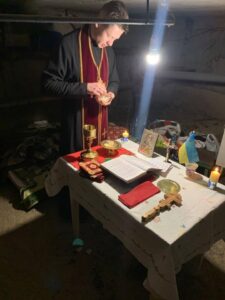 This is why we have sacred spaces and sacred objects. So that when the sacred objects are taken out of the sacred spaces and interact with the world, the holiness that they have found here can also be realized there. The precious metals and luxurious fabrics of this young priest’s chalice, paten, and stole, mean far more against the backdrop of the dank basement than they would if left in isolated splendour inside the church where they are normally kept.

We must not be like the older son in today’s parable, jealously guarding his riches and resentful when asked to share them. We must be instead like the father, who runs down the road to welcome the son who has comprehensively messed up his own life, brings him a robe and a ring, and serves up the prize calf out of sheer joy that he is home.

So yes, if it were feasible (which it isn’t), it would be entirely fitting for an old baptismal font, once it was no longer needed for its original holy purpose, to be appropriately deconsecrated and placed in the outdoors, perhaps with a little statue of St. Francis beside it and some cheerful flowers planted around the base, where God’s sun could shine on it, God’s rain fall on it, and God’s humble, innocent creatures find water to drink and bathe.

The sparrow has found her a house and the swallow a nest where she may lay her young; by the side of your altars, O Lord of hosts, my King and my God.

Or, in the words of the prayer that is paired with this Psalm in the BAS:

God of pilgrims, teach us to recognize your dwelling-place in the love, generosity, and support of those with whom we share our journey, and help us to worship you in our response to those who need our care; for all the world is your temple and every human heart is a sign of your presence, made known to us in Jesus Christ our Lord. Amen.

« Good fruit on the fig tree
Report to the Parish Meeting, March 27 »