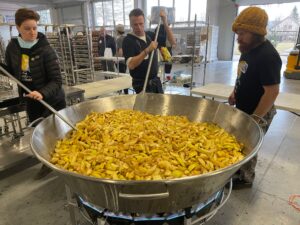 This is one of those Sundays where you really want to be able to talk back to Jesus and say, “OK, which one is it?”

Some people in the crowd bring to Jesus’ attention an atrocity committed by Pontius Pilate, the Roman governor, against some Galileans – Jesus’ countrymen. These people were obeying God’s commands and sacrificing in the Temple, and for some reason – nobody knows why – Pilate took offense, or saw them as dangerous, and had them slaughtered. The incident is not attested outside of this passage in Luke, so we have no additional context.

Was this an attempt to get Jesus riled up against Pilate’s atrocities? Was it just gossip based on a common Galilean identity? The people saying it don’t present it as a question about what the Galileans did to deserve their fate, but that’s how Jesus takes it, and that’s the focus of his reply.

He asked them, “Do you think that because these Galileans suffered in this way they were worse sinners than all other Galileans?”

Oh, good! we think upon reading this. Jesus has rejected the lazy and harmful thinking by which we tend to blame people for the bad things that happen to them!

But Jesus is still speaking – and what he says next is, “No, I tell you, but unless you repent, you will all perish as they did.”

So which is it? Can we be blamed for bad things that happen to us, or not? Do we need to repent to avoid punishment, or not?

Instead of answering that question directly, Jesus proceeds to tell a parable that underscores both the generosity of God’s mercy, and the sense that a time of decision is approaching. The absentee landlord stops by to quiz the faithful gardener about an underperforming fig tree. The landlord wants to yank the tree out, frustrated with how it is “wasting” the soil. The gardener negotiates for just one more year. The tree gets another chance, but both landlord and gardener know that the ultimate goal is still fruit.

Some commentators writing on this passage emphasize that Jesus was focused not on the ordinary tribulations of his followers, but on the coming Kingdom, and on the journey that he was already on, toward Jerusalem and the Cross – where he, too, would become one of those “whose blood Pilate had mingled with their sacrifices.”

So the idea is that the specifics of who did what, deserving what punishment, are irrelevant; the important thing is the urgent invitation to everyone to turn around – the literal meaning of the Greek word translated “repent” – and orient their lives toward Jesus and his message while there is still time.

What Jesus rejects is the idea that we are individually responsible for the specific bad things that happen to us. Human beings are all too prone to see life, and salvation, as a competition, or a zero-sum game – if I’m succeeding, it must be because someone else is failing, and I need to reassure myself that there’s a good reason why they’re failing, so that I can feel good about my success. The slaughtered Galileans, the people crushed by the falling tower – too bad, but clearly they just didn’t have what it takes in the race to the finish line.

That is the mindset that Jesus rejects. But it doesn’t mean that anything goes. What it does mean is that our salvation is not up to us as individuals. It’s not something we can win at the expense of others. It’s something which happens to all of us, together, as a community. All must repent, because the Kingdom is about to break in.

We see this same dynamic in the Epistle, where Paul makes a peculiar list of sins and their consequences – idolatry, sexual immorality, putting Christ to the test, complaining. Paul skates perilously close here to exactly the kind of equivalence that Jesus condemns: “these people did X bad thing, and so Y bad thing happened to them.” But just as Jesus does, Paul says, “These things happened to them to serve as an example … So if you think you are standing watch out that you do not fall. No testing has overtaken you that is not common to everyone.”

The testing is common to everyone. We are not alone in our wrestling with God, in our faltering and in our repentance. There is solidarity in guilt – and solidarity in salvation. The verses from this passage that ring out like a trumpet call are the first ones –

So, let us let go of fretting about whether we or other people have done something to deserve the bad things that happen to us. And let us, together, turn to Jesus, because the time is short and God calls us to bear good fruit.

Let us heed the voice of the prophet, who calls us:

Ho, everyone who thirsts, come to the waters; and you that have no money, come, buy and eat! Come, buy wine and milk without money and without price. Why do you spend your money for that which is not bread, and your labour for that which does not satisfy? Listen carefully to me, and eat what is good, and delight yourselves in rich food. Incline your ear, and come to me; listen, so that you may live. I will make with you an everlasting covenant, my steadfast, sure love for David.

We may not deserve the bad things that happen to us, but a thousand times more we don’t deserve the abundant blessings God pours out on us every moment of our lives. We are invited to come to the feast, to buy wine and milk without money and without price; to turn to God, to find there the salvation that awaits all people, and to bear good fruit.

When I read the Isaiah passage, what came most strongly to mind was this:

“When you leave the sidewalk that passes a gate into Poland, there is a walkway with tents on both sides. Food, candy, warm drinks, refugee agencies. Everyone is there to help. There is nothing to buy. Everything is to be taken as wanted or needed.”

Those are the words of Steven Givot, a volunteer with World Central Kitchen, the extraordinary aid agency that has been feeding thousands of people in cities on the Ukrainian border for the last three weeks. Steven describes giant pots with literal tons of cut-up meat, hours on end spent peeling potatoes, and bushels upon bushels of apples processed into baby food. All of it provided without cost and without question.

That is the Kingdom of God. That is the good fruit that we bear when we turn toward Jesus. Not each of us as individuals, keeping score in the competition for salvation – but all of us, together, ensuring that there is enough.

Ho, everyone who thirsts, come to the waters; and you that have no money, come, buy and eat!

« Fasting to feast
The sparrow has found her a house »