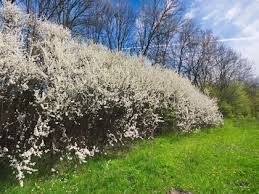 As he was walking through one of the Clwyd fields towards the river, with a high wild hedge on one side of him and the dark ploughed soil on the other, he heard a dull, muffled thudding somewhere ahead. Then suddenly at a curve in the field he saw the figure, moving steadily and rhythmically as if in a slow, deliberate dance. He stopped and watched, fascinated. Rowlands, his shirt half-open and a red kerchief tied around his neck, was making a transformation. He moved gradually along the hedge, first chopping carefully here and there with a murderous tool like a cross between an axe and a pirate’s cutlass, then setting this down and hauling and interweaving whatever remained of the long, rank growth. Before him, the hedge grew wild and high, great arms groping out uncontrolled in all directions as the hazel and hawthorn did their best to grow into full-fledged trees. Behind him, as he moved along his relentless swaying way, he left instead a neat fence: scores of beheaded branches bristling waist-high like spears, with every fifth branch bent mercilessly down at right angles and woven in along the rest as if it were part of a hurdle.

This description of hedging on a Welsh farm in the 1970s comes from Susan Cooper’s novel for children, The Grey King. The main character, twelve-year-old Will Stanton, is recuperating from a severe illness with his cousins in Wales, and encounters the hedger, a shepherd named John Rowlands, while out for a walk. When Rowlands notices he’s there, he says to Will (sadly, I cannot reproduce the Welsh accent):

“You are thinking, here is this wonderful healthy hedge full of leaves and hawthorn berries, reaching up to the heavens, and here is this man hacking it down like a butcher jointing a sheep, taming it into a horrid little naked fence, all bones and no grace. … Well, let me tell you now, if we were to leave this lovely wild hedge the way it is now, and has been for too long, it would take over half the field before this time next year. And even though I am cutting off its head and half its body, all these sad bent-over shoots that you see will be sending up so many new arms next spring that you will hardly notice any difference in it at all.”

“Now that you come to mention it,” said Will, “yes, of course, the hedging is just the same at home, in Bucks. It’s just that I never actually watched anyone doing it before.”

“Had my eye on this hedge for a year,” John Rowlands said. “It was missed last winter. Like life it is, Will – sometimes you must seem to hurt something in order to do good for it. But not often a very big hurt, thank goodness.”

The connection to our gospel reading for today, the well-known passage about the vine and the branches, is obvious.  (If you were more struck by the story of Philip and the Ethiopian eunuch, be patient – we’ll circle back to that one next week!)

The whole business of growing things – farming, gardening, wild plants, the whole cycle that includes sprouting and fruiting and dying and returning to the earth – is such an extraordinarily fruitful metaphor for life in general, and the life of faith in particular. If we begin with Jesus as vine, ourselves as branches, and the Father as vinegrower, the images multiply almost without trying, growing in all directions like, well, like a sprouting and branching vine.

If God is the vinegrower, then what is the soil in which the vine is planted? Perhaps the love of God, which we are “rooted and grounded”, as Paul writes in Ephesians. What is the rain that falls on that soil, nourishing the vines? The prophet Isaiah says that God’s word is like rain and snow that falls from the heavens to water the earth. What is the sun that ripens the fruit? Perhaps the grace of God, poured out in abundance on us undeserving sinners?

These images are beautiful but not always comfortable. I took a walk in the rain today; I had an umbrella, but it was still in some ways less pleasant than a walk on a sunny day. The garden is beautiful and fruitful, but it takes a lot of work to keep it healthy and growing, and the whole enterprise is inescapably oriented around dirt. John Rowlands’ hedging made the fence look damaged and skeletal until it had a chance to grow back. Cultivating the plants we do want involves a lot of yanking out the plants we don’t, and trying to keep wild creatures from indulging their perfectly natural appetites on our tomatoes.

When Jesus says that his disciples “have already been cleansed by the word that I have spoken to you” the verb he uses for cleansed is the same word in Greek as the verb translated prunes when he is talking about branches. This cleansing is very probably going to be painful. And if a branch doesn’t bear fruit, it might end up withered, burned, or both.

The thing about horticulture, though, is that when you’re dealing with living things, nothing is ever truly lost or wasted. The clippings, the prunings, the weeds, the spent plants pulled up to make room for the new crop, even the ashes of the withered branches that have been burned – all of it can be piled up and turned into something else, something that enriches the soil, and is thus the opposite of useless.

As anyone who has ever tended a compost pile knows, though, the crucial ingredient in this process is air. Aerobic composting, where the pile gets lots of oxygen and is regularly turned and mixed, results in lovely, smell-free, fertile soil.  Anaerobic composting, where a pile of organic matter is sealed off and left to rot unassisted, results in a slimy mess.  In Biblical terms the air, the wind, the breath, is God’s spirit, or more prosaically, it could simply be seen as the fresh breeze of honesty and openness, of telling the truth. Dead, sick, and nasty things fester when covered up; when aired out, they can be transformed into something living, healthy, and fruitful.

When I had my mini-farm in New Hampshire, I was sometimes genuinely struck dumb by the miracle of compost, the transformation of carrot peels and dandelion roots and autumn leaves and chicken manure into this substance that literally gave life to my garden, and through it to Peter and me. (And believe me, I did my share of pruning there too – starting with the enormous forsythia that had to be hacked back to half its size every spring or it, like John Rowland’s hawthorn hedge, would take over completely.)

Our gardens – our lives, our faith, our society, our church – have taken a beating over the past year. There are branches of the vine that have been torn away prematurely, when they should still be firmly rooted. There have been crucial soil nutrients that we simply have not had access to, because they are generated only by being together in worship and fellowship. It’s possible that there are things which have been pruned away in this pandemic that needed to be pruned; and it’s also possible that we will have to find new and creative ways to till and fertilize the garden to bring it back to optimal health.

But as long as we remain rooted in the soil of God’s love, abiding in Jesus the vine, nourished by the rain of God’s word, and cared for by the Creator, the Vinegrower, all will in the end be well, and we will bear much fruit.