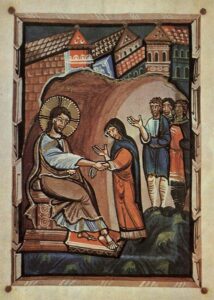 It is [God] who sits above the circle of the earth, and its inhabitants are like grasshoppers; who stretches out the heavens like a curtain, and spreads them like a tent to live in; who brings princes to naught, and makes the rulers of the earth as nothing. … He gives power to the faint, and strengthens the powerless. Even youths will faint and be weary, and the young will fall exhausted; but those who wait for the Lord shall renew their strength, they shall mount up with wings like eagles …

This reading from Isaiah says two things about God: two things that one might assume, on the face of it, to be contradictory. One is that God is incredibly powerful, sitting above the earth and spreading out the heavens, raising up and casting down the inhabitants of the globe, “great in strength, mighty in power” stirring up storms and calling the stars by name. Particularly in an ancient civilization that had little understanding of why the weather and nature worked they way they did, such a God inspired awe and fear.

And yet, that same God is also profoundly concerned for the lives and well-being of God’s fragile, mortal creations. God, who does not faint or grow weary, whose understanding is unsearchable, nevertheless cares about individual human beings, taking pains to ensure that they will not be overcome by exhaustion. God gives power to the faint and strength to the powerless; those who wait for the Lord shall renew their strength.

To use big theological words, this God is both transcendent and immanent. Transcendent, in that God sits on high and sees and knows all; immanent, in that God is intimately present and involved with ordinary creatures doing ordinary things. (That’s immAnent spelled “i-m-m-a”, by the way; not the same word as the one that means “about to happen any minute”.)

The same startling juxtaposition happens in the Psalm: The Lord rebuilds Jerusalem; he gathers the exiles of Israel. He heals the brokenhearted and binds up all their wounds. He counts the number of the stars and calls them all by their names. Great is our Lord and mighty in power; there is no limit to his wisdom.

The same God of limitless wisdom and might is the God who concerns himself with the brokenhearted exiles of Israel, binding up their wounds and bringing them home.

One could understand, perhaps, nevertheless, the difficulty that the people sometimes had in really understanding God’s presence among them. “Have you not known? Have you not heard?” asks the prophet, scolding them for their faithlessness and forgetfulness of what God has done for them. But can you really blame them? The transcendent God often does feel distant, unaffected by and unconcerned with petty human struggles. It’s all very well to gaze up at the night sky and contemplate the infinity of God’s power, but that doesn’t pay the mortgage or put food on the table.

And that is where the Gospel reading picks up – because in this first chapter of Mark, with its headlong narrative of the first days of Jesus’ ministry, we see what it looks like when the transcendent God comes to earth, acquires a body with hands and feet and a mind and heart, and begins to bring that power directly to God’s beloved people.

The passage picks up directly where last week’s left off: after teaching in the synagogue at Capernaum and driving out the “unclean spirit”, Jesus proceeds to Simon and Andrew’s house with those two disciples, and James and John. Jesus heals Simon’s mother-in-law of her fever – his first healing in Mark – and she responds by “serving them”.

That evening, the whole town gathers around the house, bringing their sick and demon-possessed to Jesus, who heals them and casts out the demons, “and he would not permit the demons to speak, because they knew him.”

Finally, the next morning, Jesus goes out to the desert to pray, and Simon and the others search for him, telling him accusingly that everyone is looking for him. Instead of returning to Capernaum, however, they go on to the neighbouring towns to continue proclaiming the message.

When the transcendent God becomes immanent by taking on actual human flesh, he teaches, heals, drives out demons, and prays.  And the people respond by seeking him out, by marveling – and by serving.

It behooves us to take a closer look at Simon’s mother-in-law’s response to Jesus’ first healing in Mark’s Gospel.  At first glance, it seems like a conventional, and unfortunate, gender dynamic that a woman visited by five men would respond to being healed of her fever by getting up and serving them. And there probably is an element of that going on here!

But the Greek verb for “serve” that is used here is diekonei – from the same word where we get “deacon”.  It means not just ordinary household service (though it does mean that) but also the work of a minister of the gospel. Arguably, Simon’s mother-in-law is the first deacon, and one has to wonder whether her story was included in the Gospels partly because she remained active and well-known among Jesus’ followers throughout his life and after his death and resurrection.

So, one response to the coming among us of God in human form, is service.  We become aware of God’s presence; we receive God’s healing; and, in love and gratitude, we in our turn serve others, offering our efforts to continue God’s work in the world. In a way, this means that we join in the immanence of God, becoming, as St. Paul would say, the limbs of the Body of Christ.

As well as Jesus’ first healing, this passage also contains the first (but far from the last) example in Mark of Jesus fleeing from the crowds to be alone and pray. Drained by the demands of healing the sick and driving out demons, he must retreat and be in communion with God the Father.

Through the lens we have been using, of the God who is simultaneously immanent and transcendent, one could claim that this is Jesus, the immanent God, reconnecting with and reminding himself of his transcendent identity. Surrounded by the insistent press of humanity, with its needs and wants, longings and fears, he is at risk of being overwhelmed if he does not recall the fullness of who he really is, and retain the perspective of the God who sits above the heavens.

And we humans, limited, needy and fearful as we are, would do well to do the same; to meet God not only in service and in the midst of the crowd, but also alone on the mountainside, in prayer and contemplation.

God is both the all-powerful creator of the universe and the exhausted Galilean man surrounded by crowds begging for healing.  And we are called to respond with both prayer and service, and with love and awe.

« The Biden administration and childcare, or, representation matters
Passing the torch »