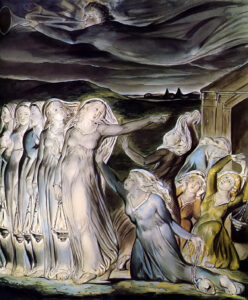 William Blake, “The Parable of the Ten Virgins”

For many centuries, there was little debate about how to interpret the parables in the Gospel of Matthew. They were about the kingdom of heaven; the king, master, landowner or bridegroom was God, who decided who got in and who was kept out; any symbols used in the story referred to abstract spiritual concepts, such as faith; and that was that.

And that certainly seems to be the pattern, on the surface.  Jesus is hammering home – to an audience composed of his enemies as well as his followers – the message that the kingdom of heaven is already being revealed among them, that there are urgent decisions to be made about what side people are on, and that the moment of that choice may come at an unexpected time.

But recent interpretation has focused more and more on the interpretation of the parables in light of the social and economic realities of Jesus’ time, and has asked questions like, where is the power in this story? If money or other resources are referred to, are they really symbolic, or are they reflective of the actual dynamic between rich and poor in the first-century world? And are we so sure that the figures we think are God, or us, or “the bad guys”, really are?

For example, in today’s gospel, it’s very easy to accept at face value Jesus’ designation of five of the ten bridesmaids as “foolish” and five as “wise”. But if the wise ones knew that the foolish ones were foolish, why didn’t they bring extra oil?  Why did all the lamps have to be lit, anyway – couldn’t the bridesmaids who had run out of oil just tag along with the ones who hadn’t until they all arrived safely at the wedding feast?  Why do the foolish bridesmaids get blamed, instead of the bridegroom who keeps them all waiting for hours?  And if the moral of the story is “keep awake”, then why is it just fine that all ten of them fell asleep, but then half of them get locked out of the feast over empty lamps?

If we’re not alert to questions like these, it’s very easy to get lazy and just say, oh, the oil is faith, or good works, and the foolish bridesmaids didn’t have enough and so they can’t go the party (which is a metaphor for being sent to hell) and that’s too bad but I guess that’s what God wants, right?

Well, no. First of all, it’s very uncertain whether Jesus’ audience would have conceptualized heaven and hell the way we do; Jesus was not talking about one portion of humanity getting to sit on clouds playing harps while the rest were poked by demons in cauldrons. Jesus was proclaiming the presence of God here, now, among these people, in his very own person sitting there in front of them, and asking them to decide whether that was going to have an impact on how they lived their lives.

And it’s a safe assumption that Jesus doesn’t tell stories in which people get harshly punished for things over which they have no control. So if the bridesmaids are locked out of the party, it’s because they knew they would need more oil, and they simply chose not to get it.  Not because they couldn’t afford it, or couldn’t find it, or had no way of predicting they would need it.

The idea that God sends anybody to hell if they don’t want to go there – or keeps anyone out of the kingdom who is genuinely trying to get in – is a distortion.  If God is truly what you want, eventually you will get there.  But conversely, God gives us the dignity and freedom of letting us choose. If God is truly what you don’t want, God is not going to compel you into the kingdom.

The foolish bridesmaids knew what they needed to do to get into the wedding feast, and for whatever reason, they didn’t do it. There’s no evidence in the story that anyone was oppressing them or preventing them from getting it; they just didn’t bother.

And if there’s one thing that God is absolutely determined on, it’s that the wedding feast – the party, the eternal celebration of the communion of saints – is going to go on, and nothing can stop it, not human sin, not the Cross, and not anyone who chooses to stand outside stomping their feet and yelling “You can’t make me!”

So in that case, what is this “oil” that the foolish bridesmaids lack? It’s not exactly faith, and it’s not exactly good deeds. We don’t believe that people are brought into the kingdom based on a performance review, and trying to measure faith and peg it to salvation leads you down the road of Calvinism, of eternally second-guessing your own emotions and motivations, and being tempted to despair if you start to feel doubt.

I think what the bridesmaids don’t have is something more basic.  You might describe it as “desire” or you might describe it as “responsibility”. Or you might peg it to what I said near the beginning, about how Jesus’ message in these parables that he tells just before the Crucifixion is that the kingdom of heaven is already being revealed among his hearers, and that that message is both tremendously urgent and tremendously important.

These are the big questions, the big choices. Do you want what God wants, for yourself and for the world?  Or are you just going to blow it off and do whatever feels good in the moment, or whatever seems to get you the most power and the most stuff?  God will not force you to come to the party.  But God also isn’t going to make everyone else on the guest list wait forever while you sort yourself out.

It’s not enough to have a vague sense that the Kingdom of God would be nice to have and you might get around to getting started on that sometime later. If God is what you want, then God is big enough, and important enough, that all of life needs to be in and with and for God, not just an hour or so spent in a church service each week.

What this looks like is different for every person, because God has created each of us gloriously unique. For some, it might be learning: reading the Bible, taking a class, seeking to deepen faith through the intellect.  For others, it might be prayer: creating an ongoing meditation practice, or learning to pray the Daily Office.  For yet others, it might be service: finding God among the lost and forgotten of our society, and helping to bring in the Kingdom by seeking justice and peace.

But regardless of the exact form it takes, the point is that it’s, by definition, not something someone else can do for you.  God can pour out God’s grace and presence on you, your friends can encourage and support you, but in the end, the way you prioritize your life is your decision.  The wise bridesmaids can’t lend their oil to the foolish, because that’s impossible.

You’re not judged on how much oil you have; an overflowing jar is not too much, and the tiniest drop is not too little.

So what kind of oil might you need, at this particular moment in time? What lamp is God waiting to light in you?

Because the only person who can make that decision to keep the lamp filled and trimmed, is you.

The Kingdom is here, now, among us.  God is inviting us all to the feast.  The only qualification is that you want to be there.

Keep your lamps trimmed and burning, friends. And I’ll see you at the party.

« Current snapshot of Christmas projects and preparations
Stewardship letter for 2021 »