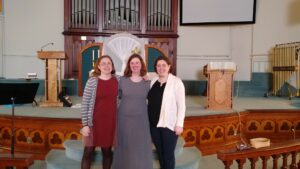 Today was supposed to be the day we went back to having Eucharist.

Ever since we decided in July to apply to reopen, I had been quietly thinking over what I might say on that occasion, and how nicely the Harvest Thanksgiving theme would dovetail with our gratitude and rejoicing in returning to God’s table.

And then the second wave began, and that sermon will never be preached. God willing, it will be weeks and not months before we celebrate Communion again, but on this Thanksgiving Sunday, we must find other things to be grateful for.

Just one of a thousand changes of plan that have been made necessary by the impact of COVID-19.

I don’t usually think of myself as a terribly spontaneous person.  I like to have a plan and stick to it. But today I want to tell you the story of another time when I had to change my plans quickly and unexpectedly, because I realized awhile back when I brought it up in our chat after Zoom Evening Prayer that much of the parish doesn’t actually know this story, though the Selection Committee will, I’m sure, remember it forever!

On the weekend after Easter in 2018, Peter and I drove up to St. Albans, Vermont, to stay with Megan Stowe, who was then the pastor of the Methodist church in that town. Jen Bourque and her family drove down from Montreal to spend the weekend as well; thankfully, the Methodist parsonage in St. Alban’s is large and rambling, and could easily accommodate five adults and five boys who at the time ranged in age from 3 to 11. We had a fun weekend, despite the unseasonably cold weather, and I got to pick Jen’s brain about the parish then known as PRAM, where I was interviewing the following Monday and Tuesday.  The plan was to leave St. Albans Sunday afternoon, drive back to Nashua, New Hampshire, hand Peter off to my dad, who would stay with him while I interviewed, and then board a plane in Boston on Monday morning.

A few hours after online check-in opened for the flight, I started the process to get my boarding pass … and realized that my passport had expired two days previously.

Megan, Jen, and their spouses sprang into action as I tried to tamp down my instinct to panic and get my brain to catch up to this new reality. Within minutes, I had an emergency appointment at the St. Albans passport office for 8:30 the following morning. I called WestJet and cancelled my flight, and I packed Peter into the car and drove across half the state of Vermont to hand him over to my dad in a parking lot in Norwich before driving back to St. Albans and staying an extra, unplanned night in the parsonage. And I frantically emailed Suzanne Taylor, the chair of the selection committee (whose phone number I didn’t have at that point), to let her know that I would not need to be picked up at the airport!

I had the passport in my hands by 2 pm on Monday, and I made it to the Synod office on time for my meeting with Robert Camara that afternoon. However, I had planned to repack my suitcase at home on Sunday evening, which meant that I was on this trip with a suitcase that had been packed for a weekend with friends, not two days of job interviews!

As a result, I interviewed for this job in the following selection of clothing: my least favourite clergy shirt (which I washed out in the hotel sink overnight, and which I had only bothered packing because I’d had a video interview for another job while at Megan’s house!); a shapeless rust-coloured knit dress; a pair of clunky green Dansko clogs, badly scuffed; a second dress, borrowed from Megan; and a set of earrings bought at Rite Aid for $9.99.

And because of all this, I knew I had no option in the interviews other than being myself. I couldn’t pretend to be perfect and pulled-together; the selection committee already knew quite well that I wasn’t!

Thankfully, it turned out that the unvarnished me was what the parish was looking for, and our group had lots of fun and some really excellent conversations.  One of which featured someone asking a question about how I responded to changes of plan, and when I said, “Well, sometimes it takes me some time to adjust,” they all pointed out that I seemed to have adjusted quite effectively over the past 48 hours!

And none of us knew just how much adjusting to changes of plan we were going to be doing together, over the next two or three years!

The one who sows sparingly will also reap sparingly, writes Paul, and the one who sows bountifully will also reap bountifully. Over the past two years, the people of All Saints’ have sowed bountifully indeed. The amount of time, energy, and resources that you all have poured into this congregation is extraordinary, and I, too, have worked as hard and as well as I knew how.  That work is truly paying off in the form of growth in faith, numbers, and ministry. And even in this time of dizzying changes of plan, we are, indeed, as Paul says, enriched in every way for your great generosity.

It is a very strange time to give thanks, but we do have much to be thankful for.  Far from destroying our community and our commitment to ministry, the pandemic has strengthened them.  Being denied the joy of gathering for Communion – or gathering at all – has revealed to us their importance, and we will never take them for granted again.  Sometimes an unexpected change of plans reveals great riches.

I confess: when I interviewed at PRAM, in my ugly shoes and borrowed dress, it wasn’t the job I was most excited about. There were others that seemed sexier on paper. But the Holy Spirit’s prodding got me here anyway; by revealing us to each other as we were, not as we were represented on paper by clergy and parish profiles, a deeper and more genuine connection was created, and I couldn’t be more thankful.  Sometimes a sudden change of plan is a great blessing.

Not everything is wonderful.  We are, after all, in the middle of a global pandemic.  But we don’t need to wait until everything is perfect to give thanks. One of the beloved hymns in our service today – “Now thank we all our God” – was written in the 1630s by a Lutheran minister serving in a German town that was repeatedly overwhelmed by war, plague, and famine.  And yet they gave thanks.  In a very real way, our faith and our thanksgiving mean more in times of testing than in times of comfort.

Through the testing of this ministry, concludes Paul in today’s reading, you glorify God by your obedience to the confession of the gospel of Christ and by the generosity of your sharing with them and with all others, while they long for you and pray for you because of the surpassing grace of God that he has given you.  Thanks be to God for his indescribable gift!

You, friends, are a gift to me, as I pray that I am to you and we all are to each other.  Happy Thanksgiving.