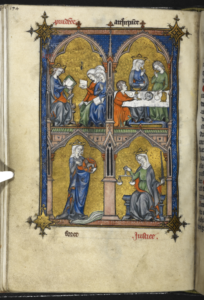 A medieval illumination of the Four Cardinal Virtues

Yesterday, as I was writing up the announcement that we are re-suspending in-person worship for a period of four weeks, I found myself typing the words, “The people of All Saints’ have been a shining example of fortitude and patience for the past six months.” The phrasing sounded familiar, and I soon realized that that was because “fortitude and patience” reminded me of “fortitude and prudence”, two of the four so-called “Cardinal virtues”.

The Middle Ages, with its passion for listing, sorting, and categorizing everything, identified seven essential virtues, and divided the list further into four “cardinal”, or natural, and three “theological” virtues.  The four cardinal virtues are Justice, Prudence, Temperance, and Fortitude.  The three theological virtues are Faith, Hope, and Charity. The “natural” virtues were understood to be those that are accessible to anyone trying to lead a good life, including the pagan philosophers which were considered required reading at the time; the theological virtues, on the other hand, were believed to be attainable only with the help of God’s grace.

It occurs to me that the past 6 ½ months of pandemic and lockdown have been an excellent opportunity to cultivate all seven of these virtues.  We might not have chosen, perhaps, to be given such opportunities, but since we have, we might as well take advantage of them.

Fortitude is perhaps the virtue with the clearest application to the times we’re in. We are being asked to endure in the face of a rather boring and undramatic kind of adversity.  This is the long haul, not a single galvanizing crisis. But the kind of courage required is no less important for being unglamourous.

Justice requires that we look at the world with clear eyes and ask how and why people are being treated differently, and then try to rectify those injustices as we are able. Whose needs are not being met as the world deals with a pandemic?  Are children, the elderly, essential workers, the unemployed, being left behind? And, of course, how can we contribute to the ongoing fight for justice for the Indigenous, Black, and other marginalized peoples of the world?

Prudence is the kind of practical wisdom that has been sorely needed as we face an invisible threat against which we have, as yet, few medical weapons. Prudence kept us almost entirely confined to our homes for several months in the spring, it guides our decisions on mask wearing, hand washing, and social distancing, and it recently impelled us to step back again from in-person worship, as the province attempts to contain a threatening second wave of the virus.

Temperance, while it can be narrowly defined as the opposite of gluttony, is perhaps better understood as self-restraint. It involves moderation, understanding that sometimes life must be low-key and not very interesting, in order to serve a greater goal.  As we have all adjusted to a life with fewer trips, fun plans, and celebrations, it is a virtue worth embracing.

These four cardinal virtues serve as the foundation on which to build the other three: the theological virtues of faith, hope, and charity. These are more paradoxical and harder to define; they ask us to love the unloveable, believe the impossible, and patiently labour for that which cannot be accomplished on this side of eternity. These, too, sustain us in this pandemic time.

Charity – selfless, divine love – inspires us to heroic efforts on behalf of people we do not know and will never meet.

Hope keeps us steadfast when plans keep changing, when we don’t know the timeline for a vaccine, treatments, or things “returning to normal”.

And faith reminds us where our ultimate trust lies – with God, who is present in all of it, suffering and rejoicing with us, giving us strength and courage, calling us to fight for justice, and making it possible for us to live these mysterious and paradoxical virtues in these unprecedented times.

« Good news in the vineyard
Kinds of belonging »