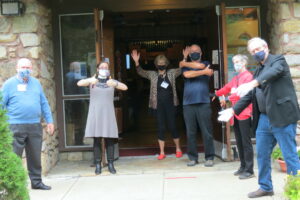 The welcoming committee on Sunday morning!

When Israel came out of Egypt, the house of Jacob from a people of strange speech …

Is there any more succinct way of describing the experience of coming home?

Both our first reading and our Psalm today describe the Exodus, that defining moment where the Hebrews, who have been enslaved for 400 years, cross the Red Sea to freedom.  Thousands of years later, both Jews and Christians still look to this story as a paradigm of how God acts in the world, delivering the oppressed and punishing the oppressor.

The pattern set by the Exodus recurs over and over again throughout Scripture. God makes a covenant with the people; the people forget their promises, and get themselves into a terrible situation; God rescues them despite their faithlessness, restores them, and brings them home. A thousand years later, it happens with the fall of Jerusalem and the exile to Babylon; and of course it is this same pattern that arches across all of scripture, from Adam and Eve’s betrayal in the garden, bringing death into the world, to Jesus defeating death by submitting to it and rising again, to the New Creation at the end of time.

These are the stories of a people who know what it is like to suffer.  To get through the day on nothing but faith and hope, to stare death in the face, to cry out to God and ask why deliverance has not yet come.

And this is perhaps why, in the last few decades of Christianity, we began to lose sight of this overarching narrative: most western Christians were sufficiently safe and comfortable during that time that these words perhaps no longer resonated the same way. Why should we sing, “Swing low, sweet chariot” and “This world is not my home” when the world actually felt quite like home, actually? Unlike our ancestors, we saw life as really quite pleasant, not a vale of tears at all, and so our worship shifted to giving thanks for our blessings and asking God to make us incrementally more moral people, rather than crying out for deliverance from powers of death and destruction beyond our control.

Not that there’s anything wrong with asking for blessings or wanting to be a better person!  But we lost the sense that one could expect life to be difficult a lot of the time, which among other things gave rise to the unspoken understanding that if your life was difficult, there was something wrong with you, and you should suffer in silence while sparing others the knowledge of your pain.

All of a sudden, the experience of being trapped in the house waiting for the Angel of Death to pass over seemed not like an image from a long-ago story, but horrifically real and immediate.  (The fact that the pandemic was peaking during Easter and Passover – when Jews and Christians live intimately with the story of the Exodus – only underscored this sensation!) All of a sudden, lamenting the agonies of life, and longing for something completely different, became our daily reality. All of a sudden, we were all in this together again, mourning and praying as one, and crying out our pain to each other and before God. All of a sudden, we could understand much better those spiritual ancestors of ours who longed, day and night, to return to the home God had promised them.

It has been twenty-six weeks – exactly half a year – since the last time we worshipped together in this beloved space. Over that time we have learned a lot about how we can be a community despite not being in the same location, how the church can be the church without necessarily having access to a building, and how God is present even when we are confined to our living spaces.

But we also longed to be together – and we longed to be in sacred space, in a building designed for prayer and soaked in it over the course of decades.  In a very real sense, today is a day of liberation and homecoming – like the day that Israel crossed the red sea out of Egypt.

But, of course, it’s not that simple.  Many of us are not here in our spiritual home, but still “at home” in the sense of isolating in our houses.  And those who are here are struggling with not being able to hug, not being able to sing, and not knowing when we will be able to do those things again.

The scripture acknowledges the partiality and the complexity of the victory. There is a longstanding rabbinic tradition that says that when the angels began to sing songs of victory before God in response to the defeat of the Egyptians, God rebuked them: “My handiwork [i.e. the Egyptians] have drowned in the Red Sea; this is no time for songs!”  Even amid rejoicing, there is still grief and loss; God’s beloved children are still suffering in so many ways.

And of course, the crossing of the Red Sea is only the beginning of the journey. For another forty years, the Israelites will wander in the wilderness, receiving the law and being formed into God’s people, before they truly come home to the land of Canaan.  And once there, they will fall into faithlessness, and forget about their promises to God, and finally be exiled to Babylon, and the whole story will start over.

In so many ways, today, we stand on the far shore of the Red Sea, safe and dry but still a little bit in shock, elated and also terrified, trying to process what we’ve just been through, and not knowing what lies ahead, only that God is leading us home.

And even as we try to work our way back to something resembling “normal”, I think we should prepared to be changed by this in many of the same ways that the Israelites were changed by the Red Sea crossing and the long desert journey. God is showing us the truth and calling us to something new.  We are being asked to be both tougher and more compassionate, to know each other better and be more ready to reach out to those we don’t know.

And most of all, we are being reminded that as beautiful and joyful and full of love as this mortal world can be, it is not our ultimate home.  God made us for eternity and implanted in us the unquenchable desire for something greater than this life – what our ancestors called the “vale of tears” – can provide.  This place, beloved as it is, is a mere foretaste and reflection of what is in store; no matter what we go through in this life, God will bring us across the Red Sea, out of exile, up from the valley of the shadow of death, and into our true home.

« Is now the time?
Good news in the vineyard »