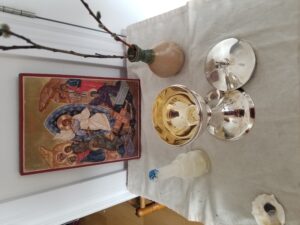 The ciborium from the church’s aumbry, empty since Good Friday, on the home altar in my guest room.

As the pandemic time has stretched out from weeks into months, a big part of the conversation in church circles has been about communion.  There have been robust debates online about the meaning and role of the Eucharist in a situation in which we were suddenly, and with little warning, forced to stop celebrating it in our accustomed manner.

Some denominations pivoted immediately to “virtual communion”, in which the pastor says the words of the service in front of his or her computer and each participant has bread and wine in front of theirs. The Anglican Communion, however, has a general consensus that according to our understanding of the Eucharist, this is not how consecration works.  In our tradition, in order for the service to be valid, the congregation has to be “together in one place” (to quote from this coming Sunday’s Pentecost reading) and the celebrant has to physically touch, or at the very least gesture over, the elements before their distribution.

Early on, our bishops offered guidance about how to approach this unexpected season of fasting from Holy Communion. Among those documents was one from Bishop Mary about the practice of spiritual communion.  As she writes, “Spiritual Communion relies upon an ancient teaching that when someone is unable, for reasons not within their control, to receive Communion in the bread and the wine, their very desire to receive Communion becomes the means by which God confers the spiritual benefits of the sacrament. … St. Augustine of Hippo laid the foundation for spiritual Communion in his commentary on the Gospel of John, and St. Thomas Aquinas explained that ‘one eats his flesh and drinks his blood in a spiritual way if he is united to him through faith and love, so that one is transformed into him and becomes his member.’ The Anglican tradition has offered this practice in a limited way to individuals, for example, to soldiers who may be stationed where there is no access to Communion, or to hospital patients who are under medical orders not to receive food by mouth.”

As outlined in the letter, Spiritual Communion would be a practice whereby we unite ourselves in prayer with “the faithful gathered at every altar of your Church where your blessed Body and Blood are offered this day”. I confess that I find this way of conceptualizing it to be highly unsatisfactory under the current conditions, because when I envision the sacrament being offered elsewhere in the world, my main thought is that it’s probably being done either privately, or in unsafe conditions due to the pandemic. There are probably groups (most likely monastic communities) that are able to have Eucharist safely, but they are few and far between.  I find that it is distracting and not spiritually helpful to contemplate being united with a priest celebrating with only family members present (thus excluding the rest of his or her congregation), or with a congregation gathering in defiance of common sense.

Hence, if I were to offer Spiritual Communion to the congregations of All Saints, I would do so by celebrating the Eucharist in my home and then displaying the elements to those tuning in online. This would be a valid Eucharist because Peter is here to serve as “congregation”, but of course I have been abstaining from Holy Communion along with the rest of the congregation since March 15, and plan to continue to do so unless there is a strong desire expressed among you for me to do otherwise.

In speaking to the members of the Corporation, Worship Committee, and others to whom I have put this question, there is a general consensus that we want to wait until we can be together in person again before sharing Communion.  The range of opinions on this subject is fascinating – many describe the community, the in-person nature of the sacrament, as an essential element of their experience.  Others would be comforted by virtual communion and find it hard to understand why the Anglican tradition (so far) forbids it.

It’s very interesting to observe how our longing for the Eucharist is a result of the liturgical transformation of the past half-century or so – after all, within living memory, many Anglicans received communion less than a dozen times per year.  In the Middle Ages, ocular communion – viewing the Host as part of the Mass, but not receiving it – was the norm for the laity. It was only in the second half of the twentieth century that the Eucharist was reclaimed as the central act of our regular weekly worship, with the whole congregation receiving in both kinds.  And there have been examples of people who lived their whole lives as Christians without ever receiving communion – the underground church in Japan went without the Eucharist for 250 years.

Thankfully, our situation is not as extreme.  But our sudden and involuntary fast from receiving communion is revealing many beliefs and assumptions that had gone unspoken.  This is an opportunity for conversation, and I hope that you will share your feelings and thoughts in the comments!

Here are some articles (on both sides of the question!) that have circulated recently on this topic:

Liza Anderson, “Wash your own feet”

« The spirit of truth
Wind and Fire »