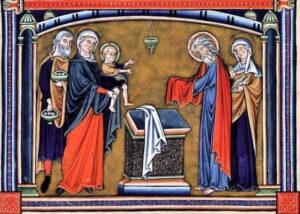 Here is a simple explanation of some of the background and customs of Candlemas in the Anglican tradition.  February 2 has an ancient identity as the Celtic festival of Imbolc, part of a cycle of four feasts that punctuate the year at three-month intervals (the others are Beltane [May Day], Lammas in August, and Samhain, which became Hallowe’en).  It is roughly halfway between the winter solstice and the spring equinox, and thus is celebrated as a festival of increasing light. (Amusingly, this also explains the other connotation of February 2 in contemporary tradition: Groundhog Day, when the groundhog emerges to pronounce upon the duration of the remaining winter as the days grow longer!)

This connection with light translated naturally to the season after Epiphany, with its emphasis on the light of Christ spreading through the world, and particularly to the Christian observance of Jesus’ Presentation.  On the fortieth day after his birth, Mary and Joseph brought baby Jesus into the Temple in Jerusalem, as commanded by the Jewish law, which required every first born son to be “redeemed” by the offering of a lamb or, if the family could not afford a lamb, a pair of pigeons.  (Jesus’ family brought the pigeons, thus offering further evidence that they were poor and simple people.)

While in the Temple, Mary and Joseph encountered the prophets Simeon and Anna, who were of great age and very devout. Inspired by God, Simeon and Anna recognized Jesus as the fulfillment of the prophecies of the Messiah, and uttered prayers of thanksgiving to God.  Simeon’s song has entered the liturgy as the Nunc Dimittis, frequently sung at Evensong:

Lord, now you let your servant go in peace;

your word has been fulfilled.

My own eyes have seen the salvation

which you have prepared in the sight of every people;

a light to reveal you to the nations

and the glory of your people Israel.

At our parish celebration of Candlemas a week from Sunday, the choir will sing a setting of this canticle; there will also be a special procession with children carrying (unlit!) candles, which will later be lit and blessed.  If you have any candles – especially candles with a special meaning, such as from baptisms, weddings or other special occasions – please bring them to church and they will be blessed as part of the service!

Meanwhile, enjoy this musical selection for Candlemas Eve (Candlemas is often seen as the very last outpost of the Christmas season, so if you want to leave your decorations up until February 2, you have a liturgical justification! ):

The resource “For All the Saints”, a supplement to the Book of Alternative Services that explains the various saints’ days and other feasts of the church, has the following commentary on Candlemas:

Thus, paradoxically, the Redeemer himself was redeemed. Many Christian writers have delighted to see the deepening of this paradox in the story of Simeon. In the fourth century, Ephrem of Edessa wrote: “When Simeon the priest received Christ into his arms and presented him to God, he understood that he was not offering Christ, but was himself being offered.” In celebrating the feast of the Presentation, the people of the Church become like Simeon, who cradled the infant Light of salvation in the crook of his arm and knew him to be as fragile as a candle-flame. In baptism, in meditating upon Scripture, and in the eucharist, Christians cradle the same Light and take responsibility for the life of Christ in our world. And yet the paradox continues. Even as they hold Christ in their hands, they may discover that they are really in the crook of Christ’s arms, being presented by him in the sanctuary of God’s joy and glory.

« After we come and see
Annual Vestry Approaches! »