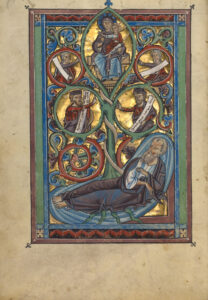 I’ll be preaching three times this Advent (no sermon on the 22nd, the day of the Christmas pageant) and as I was looking at this week’s readings and then ahead to next week’s, I realized that the themes of the scriptures actually provide a mini-sermon series with the themes of our mission statement:  Reconciling, Affirming, Rejoicing. Last week, Reconciling, we heard the prophecies about beating swords into ploughshares and making peace; next week will be Affirming – stay tuned! – and so this week, a little bit out of order, is Rejoicing.

And so we begin with the glorious and beloved reading from Isaiah, about the king who will grow as a branch from the stump of Jesse’s tree, and who will rule with justice and righteousness, so that peace and the knowledge of God will prevail over all the earth and there shall be no more pain or destruction.  The Psalm echoes this theme, describing the ideal king who will defend the cause of the weak and the poor.

Then comes the letter to the Romans, in which Paul urges his hearers to remain steadfast, live in harmony, and welcome one another as God has welcomed them.  Citing this same passage from Isaiah about the branch growing out of Jesse’s root, Paul expands the promise to all the nations; Christ has “become a servant of the circumcised on behalf of the truth of God in order that he might confirm the promises given to the patriarchs, and in order that the Gentiles might glorify God for his mercy.” The promise is no longer for only one, chosen people; it is for everyone. “Rejoice, O Gentiles, with his people!” sings Paul, astounded at God’s goodness and mercy.

So far, so good.  The righteous king is coming; the Gentiles are brought into the fold; the poor and weak receive justice; the lion and the lamb lie down together.  Let us rejoice indeed!

And then John the Baptist shows up.

“Repent, for the kingdom of heaven has come near!  Even now the ax is lying at the root of the trees; every tree therefore that does not bear good fruit is cut down and thrown into the fire.”

Trust the guy in the weird shirt who eats bugs to spoil the party.

And yet, people are flocking to see John.  So there must be something about him that is compelling.  Can John’s message also be one worthy of rejoicing?  Is there any connection between his alarming demand for radical repentance, and the alluring vision of peace and justice we are given by Isaiah?

There is; and it’s closer than you might think.

We rarely hear what comes just before the beginning of today’s reading from Isaiah. But here’s what the prophet says just at the end of chapter 10:

Look, the Sovereign, the Lord of Hosts, will lop the boughs with terrifying power; the tallest trees will be cut down, and the lofty will be brought low. He will hack down the thickets of the forest with an ax, and Lebanon with its majestic trees will fall.

And then: “A shoot shall came out of the stump of Jesse …”

The stump of Jesse isn’t just a stump because it happened to fall over in a high wind, like the big pine trees in the park along the river back at the beginning of November.  The stump is a stump because God has already put the ax to the root of the tree, has cleared out all the deadwood with terrifying power, and all that is left is the remnant stump.

Well, great.  And this is supposed to be our reason for rejoicing?

Not exactly – but it is true that you can’t have the new branch growing out of the root unless the root has been cleared of the choking underbrush. You can’t have a glorious peaceable kingdom if the predators are still prowling and threatening.  You can’t have a king who rules with justice and righteousness if the court is still dominated by those who would use political power to hurt others and enrich themselves.  You can’t welcome the gentiles if you haven’t done the hard work of creating a community that is prepared to be in true fellowship across difference.

For many in the church these days, it does feel as though the ax has been laid to the root of the tree, and in a very painful and upsetting way.  It hurts to lose familiar buildings, beloved people, and time-honoured traditions.  For those of us who remain, we feel like we’re looking at the chopped-off stumps of what used to be a beautiful apple orchard, or the bare earth where someone pulled up all our beloved roses.

And yet, perhaps the apple trees hadn’t been bearing quite as well as they needed to, and the roses were constantly plagued by diseases, and clearing them out makes way for something new to grow.  Perhaps a shoot can come forth from the stump of Jesse, after all.  Perhaps there is cause, not just for hope, but for rejoicing, right here and now.

Over the past few months at All Saints by the Lake, I’ve felt that there’s something unmistakably new and remarkable growing here. There’s a feeling that the Spirit is at work.  It’s not just that every time we turn around there seems to be a new family bringing three kids to Messy Church, or having a baby baptized and then continuing to show up on Sunday morning because they’ve found a community here that welcomes and encourages them. It’s not just that we decided on little notice to start collecting a monthly food item for St. Michael’s Mission and beat our goal by 50% in the very first month. It’s not just that attendance on a typical Sunday is up by about 4% over this time last year, in a day and age when relentless decline is the story most of us are hearing about the mainline church.  It’s not just that there’s such a hunger to learn about Scripture that for a few weeks in October and November we had three separate groups meeting regularly to study the Bible.

It’s the way we care for each other, and work together, and forgive one another.  It’s people pumping out the tunnel at two in the morning (though God willing, we won’t have to do that one again), and bringing cookies and cards and a friendly greeting to folks who don’t get out much, and singing together on Sundays and praying faithfully for each other on all the other days of the week.

Many of the folks here have been praying together and caring for each other for many years.  But to become All Saints by the Lake, you – we – went through a lot.  A lot of pruning.  The ax was laid to the root of the tree pretty thoroughly there for a while.  And yet, here we are.  Pursuing justice and faithfulness.  Welcoming the stranger. Letting a little child lead us.  And seeking the knowledge of the Lord.

God knows we’re not perfect, and never will be, this side of eternity.  But if today’s readings say one thing, it’s that our actions should be judged on how they affect the weakest among us:  the poor, the orphan, the stranger, and the little children. It was those folks who heard John the Baptist’s message with joy, because they knew that when the kingdom of heaven came near, the forces oppressing them would be overthrown.

And I think, by that token, we have a lot to rejoice about. The branch growing out of Jesse’s stump is beginning to flower and bear fruit.  This congregation is a place where the knowledge of the Lord is flourishing, where the needy find practical help, and where the wanderer is welcomed and the little children are embraced.  May the God of steadfastness and encouragement grant us to live in harmony with one another and rejoice together, as we await the coming of the Lord.

« Whatever happened to that survey?
There is life after Christmas »