Well, here we are:  our first All Saints Sunday as the Church of All Saints. What a great occasion. We are celebrating our surviving and thriving as a congregation, remembering our beloved dead and our heroes in the faith, and welcoming a new member into the family of God and of this parish.

It might be tempting, in this context, to just whistle past the challenging words of Luke in our Gospel reading this morning.  But if we are celebrating the saints, this text has a lot to say to us about what sainthood is – and what it isn’t.

To start off, a quick reminder that of course there are two things we mean when we say “saints” – the capital-S Saints, whose names are remembered and celebrated by the whole church; and the small-S saints, those individuals whom we knew and loved and with whom we look forward to being reunited in the presence of God.

We celebrate the saints because of their heroic example of faith.  And in this Gospel passage, Jesus gets down to brass tacks about what faith looks like.  Compared to Matthew’s gentler Beatitudes – “blessed are those who hunger and thirst after righteousness” – Luke doesn’t pull punches.  Luke’s Jesus declares that those who physically hunger are in fact blessed, and balances his blessings with corresponding “woes” declaring that those who are rich and comfortable need to be very concerned about the consequences of that wealth and comfort for our lives and souls.

One of the features of being a great saint – a capital-S Saint – is often that the person in question had great wealth or power and renounced it in favour of the path of holiness.  One thinks of Princess Elizabeth of Hungary, selling her jewels to buy food for the poor, or St. Francis, stripping off his rich garments and going naked before God because of his love for Lady Poverty. In a world where systems of wealth and power are bringing us closer and closer to global disaster, how can we ordinary followers of Jesus emulate their example?

And then Jesus goes on: “Love your enemies, do good to those who hate you, bless those who curse you, pray for those who abuse you.”

When Jesus says, Love, do good, bless, pray, he is not commanding believers to be passive doormats.  He is not telling those who are already abused and oppressed that their pain and suffering is God’s will and they may not do anything to change it. Loving someone does not mean letting them walk all over you.  Doing good does not mean enabling abusive behavior. One can bless and pray for someone while establishing solid boundaries.

To take an example that is on many of our minds these days, I am an American and my country is currently “governed” by a delusional narcissist who is completely unsuited for the job.  I can love Donald Trump as a fellow child of God while also believing with all my heart that what would be best for him and the rest of the world would be for him to be in inpatient psychiatric treatment, and most certainly not occupying the presidency of a global superpower.

What Jesus is saying here is that for his followers, one of the core elements of our identity is that the cycle of violence and revenge ends with us.  We do not have to let others hurt us, but we do have to reject the idea that a permissible response to being hurt is to turn around and perpetuate that hurt on others.

Another of the features of being a capital-S Saint is the willingness to take on and absorb the hurt of the world and of others, even when we don’t have to, in order to stop that cycle and set an example as Jesus did in his sacrificial suffering and death. 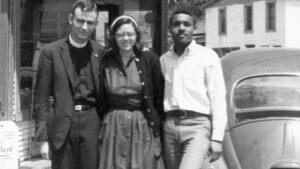 Jonathan Daniels with colleagues in Alabama.

I think of a local saint from my former home in New Hampshire, the blessed Jonathan Daniels, a seminarian from a wealthy and privileged background in Keene, New Hampshire, a graduate of an elite military academy. Daniels was studying at Episcopal Divinity School in Cambridge in 1965 when he took a trip down to Alabama to participate in the Freedom Rides and register black voters. His heart was captured by the people and the situation there, and he took a leave of absence from the seminary to spend the spring and summer in Selma.

In August of 1965, Daniels and several others – a mixture of white volunteers and young African-Americans – were briefly jailed for their activities. Upon their release, they stopped by a convenience store to buy cold drinks, and when they came out a local sheriff’s deputy with a gun stood in their way.  Realizing he was about to fire, Jonathan shoved 16-year-old Ruby Sales out of the way and took the bullet; he was instantly killed.

The Episcopal Church now venerates Jonathan Daniels as a martyr, and Ruby – whom I heard speak in Keene on the anniversary of Daniels’ death in 2015 – has devoted her life to the cause of black empowerment and racial reconciliation.  She does not suffer fools gladly, and she lets no one vilify or gaslight her for demanding justice.  But she did not turn around after Jonathan was shot and respond by shooting someone else.  She declared that the violence, the injustice, the trauma, stopped with her.  She loves her enemies not by hurting them, but by calling upon them to be better.

All of which is easy to say, but a lot harder to do.  Where does one get the kind of courage, the kind of faith, that enables such heroic deeds?

The short answer, of course, is “From God.” But that’s perhaps not terriby helpful on a practical level.

We’re about to baptize little Zachary Cyr, which means – among other things – that we’re symbolically reenacting Jesus’ death and resurrection in the person of this innocent child.  (The symbolism would be a lot more effective if we had a font big enough to dunk him in.)  Each and every one of us who has been baptized has died and risen with Christ, and, as my former bishop used to say, “You can’t scare dead people.”

That is where the courage of the saints comes from: from knowing that whatever happens, they have already experienced the worst – death – and they know that God’s inevitable response to death is resurrection.  Like the kid who dressed up as a zombie for Halloween and so knows at a gut level that zombies aren’t that scary, we have been to hell and back with Jesus and now we can claim the promise of glorious new life.

You can’t scare dead people.  Or rather, you can’t scare resurrected people; you can’t scare saints. And that’s what gives us the courage to do what otherwise might seem impossible: to love the unlovable, hope when all seems lost, and have faith that God will never let us go.