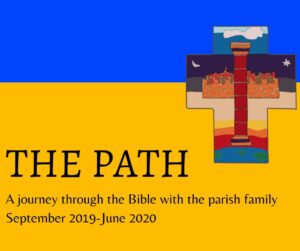 All scripture is inspired by God and is useful for teaching, for reproof, for correction, and for training in righteousness, so that everyone who belongs to God may be proficient, equipped for every good work.

There’s a modest explosion of interest in the Bible taking place at All Saints by the Lake right now, which is a truly wonderful thing to see.  In addition to our usual Wednesday morning prayer and bible study, which usually looks at the readings for the coming Sunday, we’re also meeting on Tuesday evenings for five weeks to dig deep into the Gospel of Matthew, under the expert leadership of Hilary Bogert-Winkler, the new Director of Pastoral Studies at the Dio; and every month from September to June, a group is meeting for rotating potluck dinners at members’ houses to go through the whole Bible from beginning to end, using a book called The Path that provides excerpts of the biblical text and explanations of how it all fits together. This last group, in particular, was convened at the request of one of its participants who said to me, “You know, I’ve been hearing the Bible my whole life but I really have no idea how to read and understand it, can you help?” And I said, “I love getting questions like that!” and off we went.

Reading the Bible is not for the faint of heart, on several levels. As we all know, it has all too often been used as a weapon against non-Christians or people considered to be the “wrong kind” of Christian.  Our passage from Timothy today, “all scripture is inspired by God and is useful for teaching” is one of those proof texts that is cited to support the supposed “verbal inerrancy” of the Bible, the idea that if every word in it is not factually true then the whole thing is worthless.

The thing is, though, that to the people whom God inspired to collect and write down the stories and materials that comprise the Bible, our modern idea of “factual truth” wasn’t even a category that they understood.  The writers and editors of the Bible assembled traditions of many kinds – legends, poetry, prophecy, law, history, advice, biography, letters – not because they thought it was important that every single thing in those materials had demonstrably happened or that there was nothing contradictory in them (news flash:  the Bible contradicts itself all the time) – but because those were the stories and texts that had stood the test of time.  They were the record of a people wrestling with God and clinging to their faith in God even in the face of confusion and disaster.  They were the texts that had been life-giving, that had kept the people together and kept them going.

When the writer of Timothy says that “all scripture is inspired by God” he doesn’t mean that God is literally dictating word for word into the writer’s ear.  (If that were the case, the letter probably wouldn’t end with him directing Timothy to get back the books, cloak and parchments that he had lent out and not gotten back, and then saying some very nasty things about a coppersmith who had done him wrong.) The word “inspired” in Greek is theopneustos, which literally means “God-breathed”. God breathes through scripture, and this phrasing opens up a whole rich web of connections to other places in the Bible that God is shown as breathing:  starting at the very beginning, when the wind moves over the waters in creation, and then when God breathes life into the human beings newly created from the dust of the ground.  Likewise, in the Gospel of John, when Jesus appears to the disciples after rising from the dead, he breathes on them in order to transmit God’s peace, the Holy Spirit, and the power to forgive sins.

When we talk about the Bible being inspired by God, we mean that there is a certain flavour to these words, stories, and books, that cannot be found anywhere else, and which speaks to us of something beyond our understanding.  It may not always be the most pleasant or comforting flavour, let’s be honest.  The Bible often challenges, unsettles and provokes us.  It invites questioning, wrestling, and engagement.  After all, if there were only one level of meaning in the Bible, if it were always neat and tidy and clean, what on earth would be the point?  A book that was simple and easy to understand would hardly be worthy of the lifelong engagement to which our faith calls us.  And a book that spoke only of good and pleasant things would hardly be very relevant to our often messy, difficult lives.

Take today’s Gospel reading, the story of the unjust judge and the persistent widow. As Jesus’ parables go, it’s actually a pretty straightforward story.  A widow wants justice and is fed up with the stonewalling she’s getting from the person whose job is to give it to her, a judge who neither fears God nor has respect for people (but at least seems to be commendably self-aware about it!). He finally grants her justice, not because of a change of heart, but simply because he’s tired of her pestering (and in the Greek, it’s possible that the phrase “so that she may not wear me out by continually coming” should actually be translated “so that she doesn’t decide to smack me in the face.”) And yet this figure is the one in the story who’s compared to God!

This relatively simple story can be read on all kind of levels.  You can look at the role of Hellenistic rhetoric in Jesus’ presentation of an unjust human as analogous to God.  You can flip it on its head and wonder if God is actually the widow, constantly pestering us unjust humans to bring justice on earth.  You can look around at the headlines and see all kinds of places where the concept of a mouthy, persistent woman demanding justice from powerful, privileged men is relevant to today’s world.  You can wonder why Jesus says at the beginning that the story is about prayer and at the end that it’s about faith, and what the connection between those two concepts might be.

The point is that when it comes to Scripture, there’s almost never one right answer; in fact, there’s probably an infinity of answers. As John Robinson is said to have preached to the settlers about to board the Mayflower,  “The Lord hath yet more light and truth to break forth from his Word” – and if there’s ever been evidence of that, it would be that 400 years later, God’s word has led us to have a very different view of the enterprise upon which those settlers were embarking!  Scripture is the beginning of the conversation, not the end, and one of the most essential elements of our life as a faith community is always to be carrying on that conversation, about how the word breathed by God can inspire our lives as we walk this path together.

As I’ve made my way through life and ministry, I’ve occasionally encountered someone who’s fascinated or intrigued by the Scriptural story – and often much more informed about it than many churchgoers! – and yet can’t quite bring themselves to commit to actual faith in God. Often, these folks are hesitant to come to church because they see church as something for believers, those who are definitely convinced that God exists. To which my response is always, I actually couldn’t care less whether you believe that God exists 0.1, 50 or 99.9% of the time. What’s important to me, as a pastor, is that we know the story, that we know that it’s our story, and that we grapple with the story and let it change us, let it grab us, let it impact how we actually live our lives.

Yes, I personally believe that there is a God, that that God became flesh in Jesus of Nazareth and was crucified and rose again and invites us all into new and eternal life.  I believe that because I’m too simple-minded to see how it makes any difference unless it actually happened. But if you are intrigued by the story, if you have fallen in love with the pattern, if Scripture breathes something to you that is unique and compellingly strange and that you can’t find anywhere else, if you feel called to make the shape of your life look more like the shape of this story, then I want you to be part of this conversation.

« Daughter Samaria
What is Evensong? »