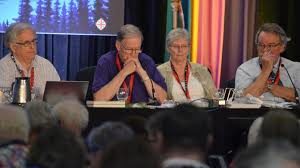 Friday was a heck of a day.

In the morning (Vancouver time) the General Synod of the Anglican Church of Canada heard a profoundly moving apology, read by Primate Fred Hiltz on behalf of the whole church, to the Indigenous peoples of this land for the spiritual abuse that was perpetrated on them over the course of the church’s history.  The vote to establish a fully autonomous national indigenous church within the Anglican Church then passed with overwhelming majorities, and Indigenous Bishop Mark MacDonald, now raised to the status of Archbishop, was presented with a beautiful ceremonial cross in recognition of his leadership.

Shortly after reading about all this, I got in the car to drive two hours to Burlington, Vermont, to participate in the Lights for Liberty vigil, part of a worldwide mobilization to protest the atrocities taking place at the US border and in detention centres around the country.  It was a moving occasion, with people coming together from many communities:  Jews, Muslims, Unitarians and Christians, local activists and migrant workers, seniors, students, and everyone in between.  Hearing again about the horrors being perpetrated by my government was wrenching, but being there to bear witness was literally the absolute least I could do.

I got home at 11 PM, just as the debate in General Synod on the amendments to the marriage canon was reaching its conclusion, and found myself unable to go to bed until the vote had come through.  And when it did, it was not easy to go to sleep.

As I understand it (and my understanding is probably not complete, since I’m still new here!), the proposed canonical change to the church’s understand of marriage would not actually be a significant change to our practice on the ground.  As it stands, dioceses are free to set their own policies, and many of the 29 dioceses in the Anglican Church of Canada already support full access to the sacraments of the church, regardless of the gender of the people involved.  In fact, a resolution, passed by an 85% majority, immediately before the vote on the marriage canon itself affirmed exactly that.

The change to the canon itself, however, requires two consecutive readings at General Synod, each of which must pass by a 2/3 majority in all three orders – laity, clergy, and bishops.  The proposal did pass in 2016, by the narrowest of margins.  In the vote on Friday evening, the proportions were: laity 80%; clergy 73%; bishops 62%.  As such, the motion failed, despite the fact that 76% of the Synod was in favor of it overall, and the proportions in the lay and clergy orders were even higher than in 2016.

This is heartbreaking for those LGBTQ+ people among us who have served the church faithfully and are being shut out from full acceptance by the decision of a handful of bishops.  And it’s unfortunate, to say the least, that the headlines will boil this complex situation down to a sound byte along the lines of “Anglican Church rejects same sex marriage” when in fact we have done nothing of the kind.  And the majority in favour of equality are not going to let this be the end.

Still, it was a hard note on which to end a very long day which had started with such hope and joy.

The words of the prophet Amos, of the Psalms, and of Jesus, hardly seem distant or irrelevant in this context.  They speak to us with fresh immediacy.  Amos, a reluctant prophet at best, has been condemning the greed, luxury, and idolatry of the elites of Israel, thundering against them for expecting God to accept their burnt sacrifices while oppressing the poor and needy in their midst.  He demands that the people reorient themselves in accordance with the “plumb line” of God’s justice, and when he is ordered to leave the sanctuary because his words are bothering the authorities, he calls down God’s judgment on them.

This is not an arbitrary judgment, in which God capriciously decides to rain fire and brimstone upon the people because they have annoyed him; this is the kind of judgment that is known to the parents of toddlers as “natural consequences”.  If you put your hand on the stove after you’ve been told not to, you will get burned and scream.  If you cut down all the trees from the hillside, your town will be washed away in a flood.  If you allow your society to become deeply unequal, worshiping wealth while the poor suffer, the rot will undermine you from inside and your enemies will conquer your cities and send you into exile.  If you abuse children on your borders, twenty years later you will find they have grown up to be terrorists implacably committed to destroying your way of life.  If you tell young queer people that they are second-class citizens in your church, the under-40s whom you desperately want to bring in will seek their spiritual community elsewhere.

And of course Jesus, with his response to the lawyer asking “Who is my neighbour?” goes one step further and reminds us that it is often the people already on the margins who are more willing to drop everything and help those who need help – even if the one who needs the help is one of their oppressors.

The thing that makes the prophet Amos maddest is the people’s hypocrisy: that they continue to offer sacrifice to God while ignoring all the commandments.  When worship is divorced from justice, it becomes meaningless.

A couple of weeks ago, I posted to the church Facebook page an article enumerating the “seven real marks of mission” for the parish church, by a cathedral priest in Scotland.  #4 is “life changing liturgy and preaching”. “If liturgy and preaching is not about changing lives,” writes the author, “then don’t get out of bed to do either. Again, liturgical style doesn’t matter nearly so much as whether what we do moves people, challenges people and celebrates people.”

In other words, our worship, as well as all the rest of our lives, is subject to the plumb line of God’s justice.  What we do here, now, on Sunday mornings, must connect in a lively and organic way with the challenges of life outside these walls, the other 166 hours of the week.  We must allow the liturgy not only to nourish us, but to change us and challenge us.  We must seek to make its message – of the truth of God with us, of the centrality of love, of the hope of life out of death – a living reality in our lives and in the world.

As we continue our service, try to listen with fresh ears to the words and look with fresh eyes at the gestures.  Let them sink into your heart and whisper to your soul.  Taste the body and blood of Christ as though for the first time.  And in the silence, ask God what God is calling you to do.

This parish has committed itself to becoming Reconciling, Affirming, and Rejoicing. On Friday, the national church succeeded triumphantly at the first, failed by the skin of its teeth at the second, and together experienced extremes of both joy and sorrow.  We can watch, and learn, and do better, and work to see how the plumb line of God’s justice falls in our own community, and follow where it leads. And we can commit to living out the truths that we speak every Sunday, making our worship and our witness line up with that plumb line.

As I was about to leave on Friday night for the candlelight vigil in Burlington, I was digging through the junk drawer to see if I had any candles to bring.  The ones I found were pink and purple – last year’s leftover Advent wreath candles.  It was what I had on hand, but it was also deeply appropriate: what better way to use old Advent candles than by lighting them in vigil with those who are longing for freedom and deliverance?

When I got there, in my collar, a gentleman came up to me and introduced himself as the rector of All Saints’ Episcopal Church in South Burlington. (He was amused to learn that I, too, represented an All Saints!)  As we stood in the wind, trying to keep our candles from blowing out, I remarked that I felt like any minute now I was going to be asked to chant the Exsultet:  the ancient chant sung just after the lighting of the New Fire at the Great Vigil of Easter, which sings of the deliverance of the children of Israel from slavery in Egypt and Christ’s victory over the powers of evil and death.

Through the Psalms, the prophets, and the voice of God’s own son, God calls us to justice, to mercy, and to care for the needy and the oppressed.  May our worship, and our lives, reflect that truth.

« The peace that passes all understanding
Nice is Different from Good »