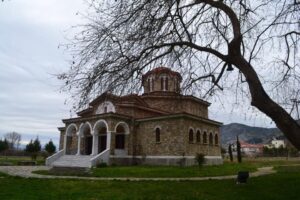 The Basilica of St. Lydia in Philippi, near the place where she and Paul met

A couple of months ago in Wednesday Bible study, I was looking something up in my Bible that had come up in our discussion, and I realized for the first time that we actually know the name of the person that the letter to the Philippians is addressed to. Acts 16:11-15 goes as follows:

We set sail from Troas and took a straight course to Samothrace, the following day to Neapolis, and from there to Philippi, which is a leading city of the district of Macedonia and a Roman colony. We remained in this city for some days. On the sabbath day we went outside the gate by the river, where we supposed there was a place of prayer; and we sat down and spoke to the women who had gathered there. A certain woman named Lydia, a worshipper of God, was listening to us; she was from the city of Thyatira and a dealer in purple cloth. The Lord opened her heart to listen eagerly to what was said by Paul. When she and her household were baptized, she urged us, saying, ‘If you have judged me to be faithful to the Lord, come and stay at my home.’ And she prevailed upon us.

The rest of the chapter is the episode of the slave-girl which Heather discussed in this past week’s Acts lecture, and which ends with Paul and Silas being miraculously released from prison. And where do they go when they get out? “After leaving the prison, they went to Lydia’s home; and when they had seen and encouraged the brothers and sisters there, they departed.”

Lydia was a church planter and a church leader; the church in Philippi was the church in her house. It is her and her people to whom Paul is writing in today’s passage from the Philippians.

Somehow, having a name and a history for the recipient of the letter makes it all so much more immediate. Paul is not just rambling on about something theoretical; he is continuing a conversation with an actual group of people, that began at that place of prayer by the side of the river.

Lydia is a fascinating character. In a patriarchal society, she was a woman who ran a household and owned a business; as a “dealer in purple cloth” she traded in a luxury good that was so complicated to produce that it was reserved for people of the highest status, including emperors. (By some estimates, it took the secretions of eight thousand of the small murex molluscs that produced the purple pigment, to make one gram of dye.)

In the polytheistic Roman empire, Lydia was “a worshiper of God” – someone who was intrigued by the idea of one God and by the beliefs and practices of the Jewish people, and participated in some of them, though she had not taken the final step of conversion. And so when she encountered Paul by the riverside, she was open to this new, strange, challenging, exciting message of the crucified and resurrected Messiah, Jesus of Nazareth. And when Paul wrote to her community about whether or not it was necessary to observe all the commandments that Jews observed in order to be a follower of Jesus, he was addressing a very immediate and pressing concern of theirs.

What strikes me this week in particular, though, are the many resonances between Lydia’s story and our Gospel reading.

I’m imagining Lydia, as a very old woman, after decades of leadership in ministry, being brought a manuscript copy of this new Gospel written by someone known as John. Perhaps she and her community have already been familiar for many years with the gospels of Matthew, Mark, or Luke, all of which also tell this story – one of the very few episodes, in fact, other than Jesus’ Passion and Resurrection, that are told in detail in all four Gospels. (The others are the cleansing of the Temple and the feeding of the five thousand.)

She sits down to read – or, more likely, has a younger church member read to her. She nods with recognition at the passage about the woman anointing Jesus for his burial. She notices the discrepancies between Mark’s depiction of this scene and John’s – in Mark, it takes place after the entry into Jerusalem; in John, just before. In Mark, the dinner in Bethany is at the house of Simon the Leper; in John, at Martha’s home. In Mark, the woman is unnamed and all the disciples complain; in John, the woman is Mary, Martha’s sister, and it is specifically Judas who is blamed for the negative comment. And in Mark, Jesus’ remark about the poor is longer: “For you always have the poor with you, and you can show kindness to them whenever you wish; but you will not always have me.”

But most importantly, Lydia notices that in John’s account, Mary’s anointing of Jesus comes just days, or at most a few short weeks, after Jesus has raised Mary’s brother Lazarus from the dead. Perhaps the “costly perfume made of pure nard” had actually been bought to anoint Lazarus’ body. This detail reveals a whole additional level of meaning to the story, new connections revealed in the age-old tradition of women using precious ointments to anoint the bodies of their beloved dead.

Lydia, as a businesswoman and the head of a household, had very probably been a widow when Paul met her, a woman acquainted with grief. Now, at the end of a long life of tending to the needs of not only the business and the household, but the Christian community she had founded, she had probably been involved on innumerable occasions in the laying out of bodies for burial. She would be intimately acquainted with the details of the process. She would be able to summon in her imagination the odour of the nard, and beneath it the insidious odour of death that had haunted the tomb of Lazarus before Jesus called him forth. She could imagine the feel of the ointment on her hands, and the different sensations of spreading it on dead and on living flesh. And all these sensory elements would point forward, toward the foot of the Cross and the quiet garden on Easter morning, when the myrrh-bearing women arrived expecting to anoint their Saviour’s body and instead found him risen and gone.

I suspect Lydia was also all too familiar with the experience of being told that she was doing everything wrong. Judas accused Mary (for his own dishonest reasons) of wasting a valuable resource that could have been used to help the poor. Women across the ages have been called frivolous and selfish for indulging in luxuries, in things that feel good and smell delicious and look beautiful. Lydia, the “dealer in purple cloth,” the ultimate luxury item of her time and place, which sold for its weight in silver, was unlikely to have avoided this kind of criticism from men who were upset that a woman was controlling such a lucrative trade.

But God welcomed Lydia’s gifts, and God welcomed Mary’s. God calls us to care for the poor and  God celebrates when we lavish beautiful things on each other out of pure love. God is always showing up in those places of paradox, where life and death, beauty and pain, blessing and betrayal, collide.

Lydia almost certainly did not live long enough to see “her” colour, the famous purple dye, become the colour that we use for the season of Lent, but she would have appreciated that paradox as well: the luxury cloth, the garb of emperors, becomes the colour of penitence and fasting, the colour we wear and look at as we contemplate our own emptiness and brokenness before God.

The soldiers clothed the thorn-crowned Saviour with a purple robe in mockery of his claim to be a King, but when the women went looking for him to anoint his broken body in the tomb, he had risen and gone, triumphing over death, revealing himself to be the true King of Sorrows and King of Heaven.

The faithful women, always, are there, seeking Jesus, caring for bodies, nurturing community, and finding the beauty in this broken world. In this Lent and Holy Week, may we walk in their footsteps, clothed in the purple of penitence and of royalty, finding ways to anoint each other and the world with the fragrance of pure love.