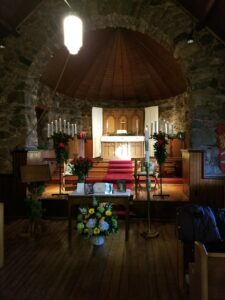 The chapel decorated for Wally’s funeral at 2 pm on Tuesday, Dec. 14

Wally Lambert didn’t wait long to get started on the adventure of life, leaving home to join the Navy when he was just 17, a decision that did not make his parents – including his WWI veteran father – happy at the time. I’ll leave some of the more colourful stories of his wartime service for Sandra to share if she likes, but suffice it to say that even as a teenager, he did not lack courage or leadership qualities. Thankfully, though, he survived the war, marrying Irene in 1950, becoming the father of Robert and Sandra, and living a very long and full life here in this community.

Like many of that generation, exposed to adventure, crisis, and trauma very early in life, he sought out calm and stability in his work and family thereafter – though he always maintained his love of boats and the water. For decades here in Dorval and at what was then St. Mark’s Church (later St. Andrew & St. Mark), Wally was a quiet but active presence, making his living as a skilled draughtsman, and using his many other talents to fix things, build things, and help people in innumerable ways. The lych gate outside this building is his design, and for many years he was the person you called when something around the church needed repair. Nobody who was part of this congregation during those years has anything but a good word to say about Wally Lambert – and his ministry was recognized further up the hierarchy when he received the Bishop’s Award in 1999.

But Wally was more than just a fix-it man with a hammer; he also cared deeply for people. Inspired by his brother Bill’s daughter, he was an active volunteer with AVA/TIL, and beloved by the people he met there; and of course he was also a longtime member of the Lachine Civitan Club. His service was never particularly splashy, but it was profoundly faithful. You knew that, if Wally said he was going to do something, he would show up and give his best.

When Irene and her kids were chatting with me last week as we planned this service, Sandra told me, “My dad was always on the side of the underdog.” As a teenager standing up to Hitler, and as a community member working to make life better for his young neighbours with developmental challenges, that was Wally (though for some reasons it doesn’t seem to have extended to active support of the Montreal Canadiens). He certainly wasn’t interested in power, riches or fame. He was interested in being the best, kindest, and most helpful person he could be.

Wally didn’t say much about his faith, perhaps; he was too busy living it. He shared with his Creator a passion for making things: for mapping out an accurate drawing, or building a solid structure, or fixing something that was broken so that it would once again be useful or beautiful. He shared with his Redeemer a passion for the vulnerable and the forgotten, for bringing healing and hope to those who were left behind. And he knew, with all the quiet conviction of which he was capable, that he followed the Lord who is the Resurrection and the Life, and that thus despite the death of his earthly body, he would never die, but rather be born into eternal life.

The last time I saw Wally, at the Lakeshore Hospital, he was too weak to receive communion, so we simply prayed together. He died peacefully, surrounded by his family, a few weeks later. He had no need to fear, because he knew that he was going to meet his Lord.

The hard part is for us, who were touched by his life and witness, and who now no longer have before us the particular image of God that he showed us, day by day. Of course it is right to mourn that loss, even as we know that Wally has gone on to larger life with the One who raised Lazarus from the tomb.

But Wally’s life of creation, faith, and service is only changed, not ended. He now sees face to face the God he followed with quiet devotion his whole life. Everything that he is is perfected in God’s presence, as he now knows as he has always been fully known. Fair winds and following seas, Wally: you have set sail on the ocean of eternity, and the adventure has only just begun.