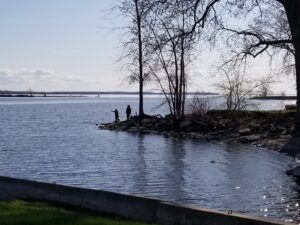 The point in Lac St-Louis where I saw the fire

A couple of days after Easter, I was preparing lunch for myself. Rummaging in the fridge, I found a piece of leftover salmon from a previous dinner, and I heated that up along with a piece of the simple free-form bread recipe that I make for holiday dinners.

Looking at my plate, I chuckled to myself: here I was, in the days right after Easter, eating bread and fish, exactly the same foods that appear in at least three of Jesus’ resurrection appearances to his disciples. Today’s passage, in which Jesus appears to the disciples and proves he is not a ghost by asking for and eating the piece of broiled fish, follows immediately upon the episode of the supper at Emmaus, where Jesus is revealed to Cleophas and his companion in the breaking of the bread. Cleophas and the other disciple are literally standing there, still breathless from their seven-mile dash back to Jerusalem, stammering out their confusion and joy, when Jesus appears in the room.

The other time that bread and fish appear in the post-Resurrection timeframe is in John’s Gospel, where Jesus and the disciples assemble on a beach by the Sea of Galilee early in the morning, and the disciples go fishing and when they come back Jesus has lit a fire and is grilling fish over it, which they eat with bread.

A few days after my bread-and-fish lunch, Peter (my 13-year-old, not the apostle) and I were walking along the river in Lachine, skipping rocks on the water and generally poking around, and on a rocky point ahead of me there was a man kneeling beside a fire that was burning merrily among the stones. It was startling (and, I’m sure, illegal!) and I kept looking at it for quite a while, reassuring myself that my eyes were not deceiving me, again having that feeling of having been suddenly dropped into the biblical narrative in a quite literal way.

There is so much that is different and strange about scripture, that sometimes we are surprised to realize that we can actually have experiences that are very similar to those of the people who knew and saw Jesus in the flesh – even if those experiences are small, and prosaic, and incidental.

This is one reason I love the book of Acts. In many ways it’s the easiest book of the Bible to relate to. It’s packed with incident – nonstop healings, prison breaks, earthquakes, shipwrecks, and people being raised from the dead. But despite the high ratio of miracles, it’s in many ways the book of the Bible that’s most rooted in normal, daily life. It’s full of incidental details that illuminate life in the eastern Roman empire in the first century AD. A boy sits on the sill of an upstairs window, falls asleep, loses his balance, and ends up on the ground. A man lives in Damascus on a street called Straight. A woman runs a business making and selling luxury textiles. A city official struggles to calm a riot in a packed theatre. These are people just like us, working, playing, eating, talking, until they suddenly come into contact with the awesome power of the One God.

Our reading from Acts today is from early in the book, the third chapter, during the portion of the narrative that is focused mainly on Peter (the apostle, not my 13-year-old) and the other ten original disciples. Peter is preaching a sermon in response to his and John’s miraculous healing of a lame man on the steps of the Temple. For some reason, the lectionary cuts off the reading halfway through, but at the end of the chapter, the writer informs us that as a result of Peter’s preaching, five thousand people joined the brand-new Jesus movement.

I don’t know about you, but if I heard a sermon in which I was told, “But you rejected the Holy and Righteous One and asked to have a murderer given to you, and you killed the Author of life,” I might not immediately change my entire life to join the group to which the preacher belonged. But apparently the crowds listening to Peter were willing to hear the hard truths, and to respond when they were followed up with a call to repentance. Perhaps I should start being more aggressive in my preaching!

Too often, I think, we believe that people want to hear comforting platitudes, when in fact they are ready and willing to be told the truth, even when it’s tough. People rarely change their lives on the basis of gauzy clichés and insipid half-truths.

Jesus’ appearances post-resurrection weren’t pretty, or predictable, or comforting. He appeared and disappeared without warning, showed up in the middle of the disciples’ mess and confusion, and told them things that broke their minds and hearts open. He ate their dubious leftovers, built fires without a permit, and let them put their hands in his open wounds.

There’s been a trend in the church, in the past few decades, to try to make the Gospel palatable. We understand that our wild claims about people rising from the dead may seem a bit absurd to scientifically-inclined modern ears, and so we water them down, make them metaphorical, talk about the beauty and power of love instead of a recently-dead guy eating fish. We hedge our bets with “yet even”s instead of acknowledging that yes, we stand over the graves of our friends singing alleluias with tears running down our faces.

But thanks to the wonders of the internet, I talk to a lot of people in their teens, 20s and 30s who have questions about, or are new to, faith. And overwhelmingly, they want mystery. They want weirdness and messiness and discomfort from their sacred stories, because their lives are weird and messy and uncomfortable. Climate change, pandemic, racism, the decline of the middle class: Millennials and Generation Z have few if any illusions that life is going to be easy or pretty or predictable. They want a God who can show up with them in the middle of the chaos, who will break bread on a beach and tell them the truth about how life is hard and they’ve messed up, and will then show them the path to do better, following him on his living, wounded feet out of all the hells that we make for ourselves.

In this Easter season, Jesus may not show up in obvious ways. He may sneak in via a piece of leftover fish, or an unauthorized fire on the lake shore. He may suddenly appear in the face of a friend or a stranger. He does tend to come and go without warning. But he will show up.

My sister is a children’s ministry professional in the Church of England. Four years ago on Holy Saturday, she wrote this on Facebook:

I swear this is happening. We have a little mini Jesus doll, maybe six inches long. At Children’s Stations, we wrap him up and lay him in the tomb in the very spare Easter Garden. The Easter Garden then gets taken down for the noon service, and the teens put it back up – in splendid fabulousness, glitter tealights and all – for the Vigil and Easter Sunday.

So the stuff has all been taken down and is in the side chapel. But the body is missing.

The wrapped body of Jesus, which we put in the tomb yesterday, is gone.

So we’re in a situation where a woman is running around the church going, “the body’s missing! It’s not where we laid it on Friday! I don’t know what’s happened to it!!”

Maybe I should ask this gardener dude. He seems to know what’s what.

(That Jesus was eventually found in the flower vestry.)

Where will yours show up? What truths will he tell? What impossible things will he do in your life? And how will you respond?