He looked, and the bush was blazing, yet it was not consumed. 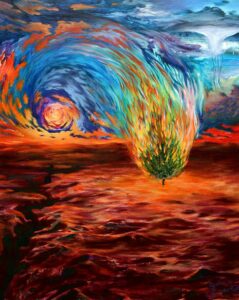 This is Moses’ first direct encounter with God, but far from the last.  Of all the figures in the Hebrew Scriptures, Moses is the one who comes closest to seeing and hearing God as God really is, particularly in the scenes on the holy mountain when God gives the people the law after they come out of Egypt. But here, at the burning bush, is the very first time Moses hears God’s voice.

When we read this story we often focus on how Moses – along with many others in Scripture – is called by God despite feeling, and arguably being, inadequate to the task.  We take comfort in knowing that despite all our own flaws and failings, God calls us, and uses us, too.

But today, I want to focus not so much on what this passage says about us, but what it says about God.

When Moses asks God’s name, which he apparently thinks will help to validate his message and his call to the skeptical Hebrews, God replies not with a personal name like those of the deities of the neighbouring cultures, but with a form of the verb “to be”: “I am who I am”.  God says to Moses, “Thus you shall say to the Israelites: ‘I AM has sent me to you.’”

The burning bush is emblematic of this.  Normally, one would expect a fragile bush in a dry environment to go up in flames rapidly, once set alight. The fire would exhaust the available fuel in a few minutes at most, and would burn down, go out, and leave behind only ash. But because of God’s focused presence, there is so much life, so much being, concentrated in this place and this moment, that the bush continues to burn even after it is logically impossible.

There are probably places, or moments, in your life that you can think of, that felt like burning-bush moments.  Where the power of sheer being, of the intensity of life and love, overflowed and it felt like you had directly tapped into the divine.  Whether it was a hummingbird in the garden, a declaration of love, the first sight of a child’s face, or a glimpse of the stars in a dark night, we all know those moments that stop our hearts, that are so full of meaning that we don’t know how to hold it all. And we may have felt the impulse to remove our shoes because we knew we were standing on holy ground.

If we are defining the presence of God as overflowing being, overflowing life, it may seem a bit odd to pair this reading from Exodus with the one from Matthew, which depicts the time when Jesus began to try to get it across to his disciples that he would be going to Jerusalem to suffer and die. This would seem to be the precise opposite of God’s presence bringing intensity of being and life.

Which may be why Peter reacts so strongly: he simply can’t get his head around the idea that Jesus could even be mentioned in the same sentence as suffering and death.  But Jesus’ purpose, of course, is precisely to bring God’s irrepressible life and being into the very heart of death itself, because by doing so he will destroy it.  He will be turning on the gas, so to speak, of the same flame that burned for Moses in the bush, and thus drive away the darkness of death forever.  But he can only do that by going directly toward the danger, not by shying away from it.  Which is what he is trying to explain to Peter later in the passage: “For those who want to save their life will lose it, and those who lose their life for my sake will find it.”

Yes, we find God’s intense being and life in moments like looking into a lover’s eyes or at a sky full of stars.  But we also find it in moments of intense challenge and high cost. We find it when we are stretched to our limit, when we may be in danger, when everything depends on what we do in that moment.  Suddenly the tap of God’s being is turned on and we are flooded with strength, with certainty, with power that comes from beyond ourselves.  Jesus, of course, being both fully God and fully human, existed in this state of intense God-being all the time.

What people get wrong with this passage is in the implication that to “take up the cross” means that we are obliged at all times and under all circumstances to deny ourselves and to suffer for the sake of some higher cause. This verse has been used to justify abuse and to override people’s healthy and essential boundaries.

But what if we saw, as part of taking up the cross, as discerning the being and life of God being powerfully present in a situation? What if we looked for the places in our lives where we can burn, and burn, and not be consumed?

Paul, in today’s reading from Romans, gives a long list of ways to demonstrate our love of God through our behaviour. Rejoicing in hope, being patient in suffering, showing hospitality, blessing those who persecute us – and that’s just the beginning.  Anyone who did all those things, all the time, would be superhuman. So perhaps it’s a matter of finding the one – or the few – things that God is calling us to do, where God is meeting us in the power of the burning bush, and identifying that as the cross that we, in particular, are called to take up.

This past Easter was strange in many ways, but one of the most noticeable ones was how not tired I was.  Even though we replicated all of the usual services – and then some – and I was also responsible for cooking Easter dinner, doing Holy Week on Zoom just didn’t match the sheer emotional and physical effort of a parish Holy Week. Usually, on Easter Monday, I can literally barely move.

But I embrace that exhaustion. I welcome it, because it means I’m following my calling.  It felt wrong, this spring, not to have it.

On the other hand, if I were to try, for example, to make a living as a community organizer or activist, it would be exhausting in a bad way.  It would drain me and I would not be replenished.  I would be angry, and cranky, and ineffective.