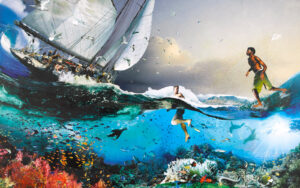 I don’t think it would have happened exactly that way if we hadn’t all been so tired. Jesus was already exhausted with shock and grief when he got there, and the rest of us weren’t in much better shape; and then the crowds showed up, and instead of the quiet time to pray that he had been hoping for, he ended up spending the whole day healing people.

Of course by evening they were all hungry, and when we told him to wind things up and send them away so they could go have dinner, somehow that ended up with us giving him the last of our own food and having it somehow turn into enough for twenty thousand people.

That was amazing, you know, feeling the power of God literally multiplying the food in our hands like that, watching as the bread and fish were passed from hand to hand and instead of running out there just kept being more – but it wasn’t exactly restful, you understand?  Having that kind of power pass through you wears you out.  And when it passes, you’re left feeling a bit like the morning after you’ve had too much wine.  We all kind of fell over where we were, and it wasn’t until the next morning that we got around to picking up the leftovers, which was the kind of grunt work that doesn’t improve anyone’s mood.

The wind was picking up, there were still people hanging around wanting a moment of Jesus’ time, and we were all more than a bit cranky. Finally Jesus cut through the bickering and said, “All of you, just get in the boat and head back across the lake.  I’ll catch up.” When we pointed out that there was only one boat, he waved us off with that look of his, like, “Really? All this time and you still haven’t figured it out?” We got that look a lot.

So off we went, leaving him to deal with getting rid of the last of the crowds, and I’ll admit it, we didn’t exactly take the most direct route.  We spent most of the day just mucking about, taking turns napping in the boat, occasionally dropping a net over the side to see what we could catch, and it was late in the afternoon before we realized that the wind had changed against us and it was going to be a lot more work than we had planned on to get back to the western shore, let alone get anywhere near where we had set out from.

Luckily we still had some of the leftover bread, and we had caught some nice fresh fish and grilled it over the brazier in the boat before the water got rough and we had to dump the coals over the side.  But it was still an unpleasant shock to realize that we were going to be fighting the wind well into another night.

At least it wasn’t raining, but even just with the waves coming into the boat, we were all soaked through and had no idea whether we were actually making any headway in the direction we wanted to go; it’s hard to navigate by the stars when your boat doesn’t stay still for two heartbeats in a row. We had reefed the sail as much as we could and were just trying to keep our tacks more or less the same length and avoid jibing, and wait it out until it started to get light and we could see where we were.

That’s what we thought he was, to start with – we saw a glow in the east and were hoping against hope that it was later in the night than we thought it was and maybe the sun was coming up. But we soon realized it was too focused to be the sunrise, plus, the light was moving.  That’s when Nathanael started hollering “It’s a ghost!” and the others, freaked out by fear and lack of sleep, began yelling and panicking along with him.

But Jesus, in that voice that somehow manages to be incredibly calm and yet also cut through whatever noisy nonsense is going on around him, just said, “Come on, guys. Buck up. Can’t you see, it’s just me? There’s no need to panic.”

By this time he was close enough to the boat – not only was he walking on the water, but he was doing so bizarrely fast, and apparently without being affected by the fact that the sea was heaving underneath him – that we could see him, and see that yes, it was him. And I don’t know what came over me, but after all the excitement and the ups and downs of the past 48 hours, suddenly I just needed to be with him. It wasn’t enough to have him coming towards me. I had more or less kept my head when Nathanael and the others were losing theirs, but now I just shouted, “Jesus! Lord, if it’s you, tell me to come to you!” And he gave me that “Really, Peter? What now?” face, but all he said was, “Come on, then.”

What you have to understand about following Jesus was that all of it was like stepping out of a boat in the middle of a windstorm at four in the morning on the Sea of Galilee. From the first moment when he had come walking along the shore and invited us to put down our nets and followed him, none of the old certainties applied anymore.  Instead of solid ground under our feet, there were fathoms and fathoms of water, tossing us around and yielding up unforeseen treasures, but also threatening to suck us down into the depths. And above our heads the night sky was limitless and full of stars.

So for the first few steps, when I was really honest-to-God walking on the water just like him, it didn’t seem all that remarkable.  I just wanted to get to him. But then a gust of wind grabbed me, and a wave smacked me in the face, and all of a sudden the depths below me were real, and I was falling.  I’m a pretty decent swimmer, but my nose was full of water and I hadn’t had the chance to take a good breath, and I was just sinking straight down. The others swear that I yelled “Lord, save me!” but when you’re drowning you usually don’t have the energy or the breath to yell, you’re too busy drowning.

And of course Jesus was right there, lifting me up out of the water, giving me That Face again and shaking his head as he said, “You may not have much faith, but it would have been enough if you hadn’t let yourself start second-guessing!” dumping me back in the boat, soaked to the skin, along with everyone else who wasn’t much drier. As soon as he sat down beside us, the waves calmed down, the wind not only dropped but shifted right around to the east, and we could get our bearings and come into shore as the dawn began to break for real. And we looked at him and the first things that came out of our mouths, by instinct, were the blessings we Jews pray to the one God, after deliverance from danger.

But you know what my clearest memory is, from those few moments of combined bizarre calm and utter panic, as my lungs were filling with water and I was sinking under the waves toward the bottom of the Sea of Galilee?

Jesus wasn’t any less there, in that moment, than he was a moment before when I was walking across the sea toward him, or than he was a moment after when he was lifting me up and hauling me bodily into the boat. I was no less surrounded by the love of God when I was sinking away from him and drowning, than when I was meeting his eyes or in his arms.  There was just no way I was ever going to get away from God’s presence, however hard I tried.

And of course when we landed at Gennesaret, there was another huge crowd, demanding healing and sending people running off to all the neighbouring villages to spread the word. But I just sat on a rock on the beach, gradually drying off in the sun, and looked out at the lake and the sky, and back and forth from them to Jesus – realizing that somehow, I wasn’t tired any more; trying to figure out what the heck had just happened; and knowing that I would never be the same.