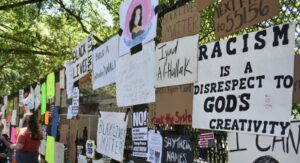 The fence outside the White House, Saturday, June 6

Humankind are created in God’s image.  It’s literally the first thing said about humans in the Bible. And yet those humans themselves seem to have a remarkably difficult time believing that it’s true.  A couple of chapters later in Genesis, we eat from the tree of the knowledge of good and evil, and everything starts to go wrong.  And one of the fruits of that poisoned tree seems to be a pervasive human inclination toward tribalism, toward the idea that there is an in-group and an out-group, and the in-group is superior, and the out-group might just be less than human. The in-group might be a handful of people or a billion, but the impulse to divide into “us” and “them” is the same.

Even in scripture, the impulse is present: after all, beginning with Abraham, God is presented as the god of the Hebrews, of a particular family and of the nation they founded.  And scripture includes instances of appalling violence as that nation takes possession of the land they believe God has given them.  Yet, almost from the very beginning, there are hints and suspicions that God is bigger than that:  that God is, in fact, not just the God of Abraham, Isaac and Jacob, but the one true God of heaven and earth.

And so, when this people compiled their sacred scriptures, the very first thing they included was the story of God creating, not just the land of Israel and the Hebrew people, but everything: earth and sky, day and night, sea and land, plants, birds, animals and sea creatures.  And humans, created in God’s image.

On this Trinity Sunday, what does it mean that we humans are created in God’s image?

As Christians, we worship a God who is one, and yet not monolithic.  A God who is manifest in multiple ways at once, who encompasses three distinct persons in an ever-shifting trinity in unity. A God whose very being reflects the harmony between things that are different, rather than the conformity that erases such difference. The Trinity is a pattern, a dance, a kaleidoscope. People with wildly varying personalities and temperaments can still find their way into the being of God through the Trinity – whether the majestic power of God the Creator, the gritty down-to-earthness of God made flesh, or the wild unpredictability of God the Spirit. No wonder this God created a world of mind-boggling diversity, overwhelming abundance, and fascinating detail, where every part plays its role in the tapestry of the whole.

So when Scripture tells us that we are made in God’s image, we should not be surprised that humanity is also wildly diverse, and that God is constantly calling us out of our sinful inclination to see one kind of person as inherently superior to another.  Every human being, without exception, was created good and in the image of God, and every human being has the potential to reveal to us something of God.

Of course, as we can see all too well in today’s headlines, in some humans that image has been debased and perverted by their own choices to pursue wealth, power and prestige and to trample on others to get there. But there is always the possibility of choosing differently, of turning around and setting foot on a new path.  God’s image remains, and we pray that those who have degraded it in themselves can find their way back.

In a perfect world, we would simply recognize and celebrate this unique and precious image of God in each person. But since the world is not perfect, and since toxic systems of prejudice such as racism do prevail to such an extent, often what must come first is standing up and insisting on justice, on demanding that God’s image be recognized in each and every one of our human siblings, as is currently happening in the worldwide demonstrations in response to the deaths of George Floyd and so many other victims of police brutality and institutional racism.

Much of the unrest, and the demands for change, come from people who had been fairly comfortable within the existing power structures finally realizing that they are deeply corrupt – that the police, for example, have a record of only protecting one kind of people, rather than everyone, and that the governments of many countries, overtly or not, perpetuate structures that oppress large groups of their citizens on the basis of race.

When we come to these distressing realizations about the powers that govern our lives – realizations that, of course, the oppressed groups have been well aware of for a long time – it behooves us to remember where the real power lies, which is with God, and how that power is expressed.

In the Genesis reading, God gives humans “dominion” over the rest of creation. This has been one of the most misinterpreted verses in all of scripture, and that misinterpretation has had horrendous results.

The actual meaning of the world translated “dominion,” however, is something more along the lines of “cultivation” – and if we look to God as an example of how power should be used, we see that it should not be about domination and control, let alone oppression, but rather about enabling every part of the whole to flourish in its own way, and to reach its full and God-given potential.  It is about ensuring that the hungry are fed, the orphan and widow are cared for and the needy are lifted up.

The problems with a vision of “dominion” as control and exploitation have often been pointed out in an environmental context – that we cannot use God’s gift of dominion over the earth as a license to pollute and destroy.  But it goes just as much for those who are given authority – large or small – in earthly political systems. It is our job to use that authority for the good of all concerned, because all – without exception – bear the image of God.

Looking at the pictures of crowds around the world putting themselves in danger to stand up to police and other authorities on behalf of themselves and others, I am struck by the beauty, strength and power on display there – but also by how much human talent and energy is devoted in this world to fighting battles that shouldn’t have to be fought.  Racism sucks up so much of the God-given potential of the people it oppresses. Think of the Black academics who spend their careers studying the violence perpetrated against their own people and trying to explain it to the world; what kind of yet-unimagined discoveries could they have made in other fields if there were no racism to study?  Think of the mothers who spend their lives seeking justice for their slain children; what wonders could they accomplish without the burden of that trauma and the necessary activism that arises from it?

We all bear the image of God – a God whose three-in-oneness embraces an infinity of identities, and a God whose dominion over the earth rebukes any power that prevents the full human flourishing of every single one of God’s children.

And so, we’ll end this morning with a work by one of those Black geniuses, who did so much and probably could have done so much more.  You probably know James Weldon Johnson as the author of “Lift Every Voice and Sing.” Here is his poem, “The Creation.”

And God stepped out on space,

And he looked around and said:
I’m lonely—
I’ll make me a world.

And far as the eye of God could see
Darkness covered everything,
Blacker than a hundred midnights
Down in a cypress swamp.

Then God reached out and took the light in his hands,
And God rolled the light around in his hands
Until he made the sun;
And he set that sun a-blazing in the heavens.
And the light that was left from making the sun
God gathered it up in a shining ball
And flung it against the darkness,
Spangling the night with the moon and stars.
Then down between
The darkness and the light
He hurled the world;
And God said: That’s good!

Then God himself stepped down—
And the sun was on his right hand,
And the moon was on his left;
The stars were clustered about his head,
And the earth was under his feet.
And God walked, and where he trod
His footsteps hollowed the valleys out
And bulged the mountains up.

Then he stopped and looked and saw
That the earth was hot and barren.
So God stepped over to the edge of the world
And he spat out the seven seas—
He batted his eyes, and the lightnings flashed—
He clapped his hands, and the thunders rolled—
And the waters above the earth came down,
The cooling waters came down.

Then the green grass sprouted,
And the little red flowers blossomed,
The pine tree pointed his finger to the sky,
And the oak spread out his arms,
The lakes cuddled down in the hollows of the ground,
And the rivers ran down to the sea;
And God smiled again,
And the rainbow appeared,
And curled itself around his shoulder.

Then God raised his arm and he waved his hand
Over the sea and over the land,
And he said: Bring forth! Bring forth!
And quicker than God could drop his hand,
Fishes and fowls
And beasts and birds
Swam the rivers and the seas,
Roamed the forests and the woods,
And split the air with their wings.
And God said: That’s good!

Then God sat down—
On the side of a hill where he could think;
By a deep, wide river he sat down;
With his head in his hands,
God thought and thought,
Till he thought: I’ll make me a man!

Up from the bed of the river
God scooped the clay;
And by the bank of the river
He kneeled him down;
And there the great God Almighty
Who lit the sun and fixed it in the sky,
Who flung the stars to the most far corner of the night,
Who rounded the earth in the middle of his hand;
This great God,
Like a mammy bending over her baby,
Kneeled down in the dust
Toiling over a lump of clay
Till he shaped it in is his own image;

Then into it he blew the breath of life,
And man became a living soul.
Amen.      Amen.

« Wind and Fire
Hope does not disappoint »