Advent I, Year A 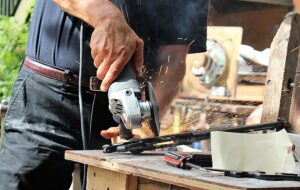 Bob Bergner dismantling a gun to be refashioned into garden tools.

Some of you remember the Rev’d Bob Bergner, who trained at Montreal Dio and was Ralph Leavitt’s curate at St. George’s, Place du Canada, before moving to the US as a hospital chaplain.  In one of those small-world moments, Bob is now the priest-in-charge at Grace & St. Peter’s Episcopal Church in Hamden, Connecticut, which happens to be the parish my parents attend.

This week’s readings brought Bob to mind, because for the last several years he has been involved in a project in my hometown of New Haven that literally beats swords into ploughshares – or rather, guns into gardening implements.  In cooperation with the police department and local artists, the church – including one of its retired bishops – participates in the process of buying back guns off the streets (no questions asked), disassembles them, and turns the metal parts into hoes, shovels, and mattocks – along the way teaching practical metalworking skills to inmates who are reintegrating into society, and providing tools to school and community gardens.  This is biblical literalism that I can get behind.

Our readings this week circle persistently around the themes of war and peace, of judgment, conflict, and expectation.  In Isaiah, the peoples are instructed in God’s ways on the holy mountain; God judges between the nations and, apparently as a result of that judgment, they beat their spears into pruning hooks and resolve neither to learn nor to practice war any more.  In the letter to the Romans, we are urged to wake from sleep, because the dawn is near, and to “put on the armour of light”: a warlike metaphor put to the service of awaiting the Prince of Peace.

The Psalm is a poignant hymn of praise to the holy city, Jerusalem, whose name literally contains the word “peace” – salem, shalom – but which has been fought over for three thousand years.  There are the thrones of judgment – the judgment administered by God in the Isaiah reading – and the last four verses of the psalm are an urgent, reiterated prayer for peace.  Then, as now, the strife over Jerusalem as a seat of earthly, political power is a grievous distraction from her role as the symbolic home of God on earth, as a meeting place for the nations, and as the seat of divine learning and instruction.

We might hope to look to the Gospel for some summary or resolution of all these recurring and competing themes, but no such easy answers will be offered.  The Gospel – as we begin a new year of the lectionary in which most of our Gospel passages will be from Matthew – is simply an excerpt from Jesus’ teaching just before the Crucifixion, when he prophecies about the end times and the return of the Son of Man, and insists that no one but God the Father knows the time of that occurrence. Therefore, Jesus concludes, his hearers have no choice but to remain alert at all times – the same exhortation given by Paul to the Romans: “now is the moment for you to wake from sleep!”  We are left, if anything, even less certain about what to expect than we were before.

So what do we do? How do we find some solid footing amid this swirl of images and warnings, bouncing back and forth between longing for peace and urging us to armour up?

Well, for one thing, we can take the psalm literally:  we can pray, for the peace of Jerusalem and by extension the peace of the whole world. As this week’s commentary says: “Prayer shaped by this psalm asks that the place meant for life, that we distort into a place of death, would become a site of resurrection. Let its walls be peace, let its towers be security, its multiple generations be bound together, its good be ours and also the whole world’s.”

And when we pray that prayer with our whole hearts, perhaps we will understand the jarring conjunction in these readings of the equipment of war and the longing for peace. Our prayer will prod us to give as much energy and commitment to being peacemakers, as those who make war give to their deadly enterprise.

Swords and ploughshares are made of the same material, and need to be equally strong; the only difference is the use that’s being made of them.  And beating swords into ploughshares takes real muscle, real strength, real skill, just as wielding the sword did in the first place.  Staying awake to watch for the Prince of Peace takes just as much discipline and alertness as standing sentry duty in the war camp.  And putting on the armour of God takes just as much stamina as wearing the military kind.

In our baptism, we signed up to be precisely this kind of peacemaker: dedicated, committed, strong, skilled.  As the letter to the Romans puts it – clearly referring to the baptismal ritual – we “put on the Lord Jesus Christ” and now is the time for us to “wake from sleep”, to be raised with Jesus into the new life that is just around the corner.

And this means that we are not doing this on our own. God has already given us everything we need to follow the call and to stay alert.  We have the armour of God, we have the strength to be peacemakers, and we have the power of prayer.

To seek the peace of Christ does not mean to suddenly develop amnesia and forget, or deny, that war and conflict are real.  It means that we take all that energy, all that effort, that have been directed toward fighting, and redirect it toward flourishing.  It means beating swords into ploughshares – gun barrels into mattocks – and learning what it means to be raised in Christ and clothed with Christ.

Serendipitously, just as I was trying to figure out how to conclude this sermon, a clergy colleague posted a picture of herself on social media with her three children, in front of what’s called the Peace Candle in Easton, Pennsylvania.  In Easton’s Centre Square stands a 32-meter-tall Civil War memorial known as the Soldiers’ and Sailors’ monument.  Every year on American Thanksgiving, the monument is covered up with a structure that looks like a giant candle surrounded by four smaller candles, and the Peace Candle is kept brightly lit until February.

The monument to war doesn’t go away; but it is swallowed up, at least for a time, within the structure that implores for peace.  May this image guide our prayers, and our action, this Advent as we wait with eager expectation for the reign of peace over all the earth.

« Pastoral visiting
Whatever happened to that survey? »