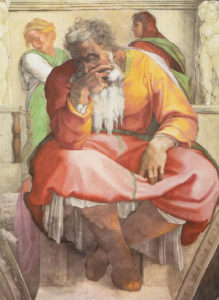 As the summer ends and the world picks up its pace again, this year we hear for several weeks in a row the words of the prophet Jeremiah. Last week, we heard the story of Jeremiah’s call, from the very beginning of the book that bears his name:  the young man hearing God’s summons to be a prophet struggles with the impact that this will have on his life, questioning as to whether God can really be calling him because he is only a boy.  But God does not let him off the hook on this account, and this week we hear a passage from the second chapter of Jeremiah, one of his first oracles as he grapples with the message that God is charging him to deliver to his land and its people.

It is not an easy word to hear, and I imagine it made Jeremiah awfully anxious to deliver it.  As we shall see, his subsequent prophetic career did nothing to change the overall pessimism of his message – we get the word “jeremiad” from Jeremiah’s prophecies, after all! – and it certainly validated his initial anxiety, as his message was met with hostility and scorn.

Hear the word of the Lord, O house of Jacob, and all the families of the house of Israel, Jeremiah begins. Thus says the Lord …

This is the classic beginning to a prophetic oracle, indicating that the prophetic is not speaking his own opinion or of his own volition, but rather as instructed by God. And the next step is just as classic:  God (through the prophet) cites the many mighty deeds God has done for God’s people in the past, bringing them out of the land of Egypt, leading them through the wilderness, and bringing them into a land of milk and honey. Finally, the prophet accuses the people of having violated their covenant with God and shown themselves ungrateful for God’s saving acts, since they are now ignoring or breaking the law and worshiping other gods: Has a nation changed its gods, even though they are no gods? … my people have committed two evils: they have forsaken me, the fountain of living water, and dug out cisterns for themselves, cracked cisterns that can hold no water.

It is a hard and heavy accusation, but it is not devoid of hope.  However demoralized Jeremiah gets, however he is ignored and then persecuted for his message, he cannot say anything different: he must tell the people the truth, in the hope that they will listen and turn back to God before it is too late.  And despite the overwhelming gloom of much of Jeremiah’s book, there are occasional glimpses of restoration and salvation:  Jeremiah buys land even when it seems ridiculous to do so, to show his abiding hope in God’s provision and care; he foretells the people’s restoration and the renewal of the covenant.

These prophetic oracles establish a clear pattern for the relationship between God, the prophet, and the people.  It is a pattern in the form of a three-fold question:  Who are we?  What has God done for us?  And what do we do about it?

For Jeremiah, the answers are, he is God’s prophet and his hearers are God’s people; God is the one who has brought them out of slavery and established them in their land; and what they need to do about it is to turn from idols and rededicate themselves to God. It all seems so very simple when you lay it out like that, but of course Jeremiah’s experience was anything but simple, and it is unlikely that the prophet himself lived to see the vindication of his message.

But even if we cannot singlehandedly bring about the will of God, we can be conscious of this pattern in our lives and the lives of our communities, and we can ask ourselves the same questions:  Who are we?  What has God done for us?  And what do we do about it?

The readers of the letter to the Hebrews would perhaps have answered thus:  We are the heirs of our forebears in faith, now brought into the resurrection life of Jesus through baptism and Eucharist; God, through Christ, has served as our great high priest leading us into an eternal fellowship with God and the saints; and we are now called to mutual love and to a continual sacrifice of praise, not neglecting to do good and to share what we have.

And a guest at the banquet Jesus attends in Luke’s gospel might answer thus: I am a follower of Jesus and a beloved child of God; God, through Christ, has come to me in human flesh and revealed the beauty of humility and truth; and thus I am called to take the lowest seat rather than pushing myself forward, and offer hospitality without the expectation of return.

We begin with our God-given identity; we recall what God has done, both in our lives and in those of the saints who have gone before us; and, resting on that firm foundation of our belovedness, we discern what God is calling us to do next.  Jeremiah is frustrated with the people not because he believes they are beyond redemption, but precisely because he knows that they are God’s chosen and sees how much God has done for them, and despairs that they refuse to live into that calling and instead are bringing God’s judgment on themselves. But always, because he sees their belovedness and God’s faithfulness even if they don’t, he holds onto hope for them.

This past week, one of our own joined the communion of saints, and we celebrated her life her yesterday.  Penny Noël was, as those who loved her eloquently attested at the funeral, someone of great courage and deep faith; God had made her a member of the Body of Christ in baptism and given her eternal life through Christ’s resurrection, and she had responded to God’s call with the blessing of a life well lived in Christian community and in Christ’s service.

The answers to the questions are innumerable, as many as there are unique children of God, unique stories, unique circumstances, and unique callings.  But they are all rooted in the one truth:  of our identity, our belovedness, and our vocation.

So how, today, do we answer those questions?  Who are we?  What has God done for us?  And what do we do about it?

Even in the midst of the wreckage that he foresaw for his people, Jeremiah held fast to this hope:  that they would remember who they were, what God had done for them, and turn, and respond in faith.

« Sabbath as Liberation
From carrier pigeons to Facebook Live »