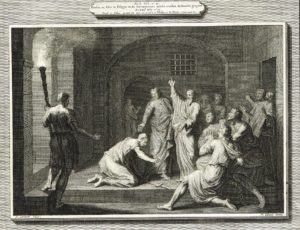 I wasn’t your ordinary prisoner.

The details of how I got there are not important; suffice it to say, once you start lying, the more you do it, the harder it is to stop. But lying to the Roman government turns out to be a very bad idea.

I had been there about two weeks.  It could have been worse. The jailer was an honourable man, and no crueler than necessary under the circumstances. I had gotten fairly accustomed to the routine, and I had enough friends left to bring me food and blankets.  But none of them would go so far as to stick their necks out and witness on my behalf in court. So I couldn’t see any way out of the legal tangle I had gotten myself into, and most of the time I did my best simply not to think at all.

And then one evening, after dark, there was a commotion at the entrance to the prison, and the jailer came in, hauling three new prisoners and pursued by several of the same local merchants who had gotten me locked up.  He tossed the prisoners – two men and a young woman – into the worst cell, the one right in the middle with no windows, while the merchants kept shouting about how they were going to be ruined – ruined! – if this sort of thing was allowed to continue.

The men’s backs were bloody from being flogged, though the girl seemed unharmed, if somewhat disheveled.  She was shrieking at the two others, though, about how they had taken something away from her.  It took me a while to figure out what was going on, but eventually I realized that what both the girl and the merchants were angry about was that someone – these two men – had robbed them of their power. The girl had had a demon who gave her the power of prophecy, and the merchants were her masters who had profited off of it.

“You didn’t even ask me!” the girl kept yelling. “My voices were what kept me safe in that miserable household, and now here I am with nothing!  And they weren’t even false voices!  They said nothing but the plain truth!  You are slaves of the Most High God, and he does offer a way for people to be saved!”

(Saved from what? I wondered. I could sure use someone to save me right now.)

“Of course. I’m sorry,” said the older of the two men. “But what was I supposed to do – just leave the demon alone?  These spirits are opposed to God.  God alone is truth, even if the demons occasionally also report the facts.”

“Come on, Paul,” the other man tried to cheer him up by saying jokingly, “you know you only exorcised her because you couldn’t stand it anymore after she followed us around for three days saying the same thing every ten seconds.”

At that point I hoped they would go to sleep so the rest of us could do so too, but no such luck; they started praying aloud to their god and actually singing there in the cell.  Singing!  At midnight!  I ask you.

And just when I was about to holler from my cell for them to please shut up already, things got even louder.  There was an earthquake, the strongest one I’ve ever felt. In the space of a breath I went from my head exploding from annoyance to knowing I was about to die.  And yet, we didn’t die. As neatly as though it had been planned that way, the doors fell off their hinges and all our chains shattered.  I and the others all got up and ran for the exits, but Paul yelled “Stop!” just as the jailer came tearing in in his nightshirt, having presumably been roused from his bed like a normal person who hadn’t had a madman bellowing hymns in his ear for two hours.

The jailer, understandably enough, took one look at the scene with all of us elbowing each other to get through the doorway, cursed loudly, and then shouted, “Well, I guess I might as well go back home and open my veins, before the governor has a chance to do it for me!”

“No!” shouted Paul, who seemed to have taken charge of the situation, on what authority I’m sure I didn’t know.  “You don’t need to do that!  We’re still here.”

And we all looked around, and indeed, no one had managed to actually get out yet.

The jailer stammered out something incoherent – along the lines of “Bloody hell, what do I do to get out of this jam?” probably invoking Mithras somewhere along the way there – but Paul jumped right in, almost as though he had been waiting for an opening to do just that.

“Believe on the Lord Jesus Christ,” he shouted, “and you will be saved, you and your household!”

Well, that sounded like seditious talk to me – the kind that could get us thrown right back in the prison, since the Romans tend to look askance at anyone but Caesar claiming the title “Lord”.  But the jailer, maybe because of the shock he had just had, just stared blankly at Paul with his mouth gaping open, and so Paul told him a story.

It sounded almost like some stories I had heard, and yet at the same time not like them at all. The story of a god whose blood was shed to give his people life, sure – but this god had walked the earth in our very own time, not some marvelous “once upon a time”?  Had talked to and eaten with people whom Paul had talked to and eaten with?  Had been crucified by the Roman state and appeared to his followers in a Roman backwater, not killed by his brother in the form of a crocodile and reassembled by a grieving goddess?

Almost against my will, I found myself listening intently. After all, don’t we all have something we need to be – or at least long to be – saved from?  We were all at the mercy of those who claimed power over us, and tearing at each other like wild dogs in pursuit of the scraps of power we could claim for protection.  The Jewish preachers had thought they were saving the slave girl from her demon, but really they needed to save her from her masters.  The jailer needed to believe something that wouldn’t cruelly demand that he take his own life if the people he was guarding escaped.  And the gods knew that I and the rest of the poor sods locked up in that dungeon needed something to give us hope – if only someone to speak for us when we’re dragged in front of the powers that be.

Can this Jesus of Nazareth offer such hope?  I don’t know, but I confess I’m kind of annoyed that Paul forgot about the rest of us in his haste to convert the jailer.  On the other hand, we did end up going free; you can’t argue with that.  And I’ve heard that he and his friends meet outside the city wall by the river, where the women go to pray.  One of their leaders is Lydia, a cloth merchant with whom I had some dealings that I’m not necessarily proud of, but perhaps if she’s a follower of Jesus now she might be willing to forgive me.

I’m under no illusions that my past won’t catch up with me again.  The slave girl still has to cope with her masters.  The jailer has to figure out how to make a living and stay on the right side of the authorities.  Since I got out of the prison, I find myself wondering about everyone I pass on the street – what’s their story?  What do they need to be saved from?

They may or may not ever have asked themselves that question, let alone know the answer.  But to know that someone – that God’s own self – became mortal and suffered death so as to break death’s power over you forever?  That does give you a new perspective on things, even if life is objectively just about as awful as it was before.  And maybe finding this community – this ekklesia – of people who call themselves brothers and sisters, will help a bit too.

So yes, I think I will show up at the gathering place by the river on the next sabbath.  Look Lydia in the eye and ask whether she can tolerate my presence.  And remind Paul the next time he converts a jailer, to think of the prisoners too.

« Baptism, then and now
Translation and Redemption »