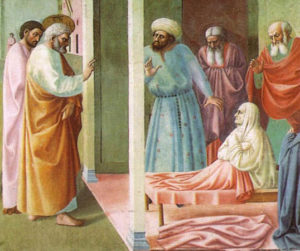 He turned to the body and said, “Tabitha, get up.” Then she opened her eyes and, seeing Peter, she sat up.  He gave her his hand and helped her up.  Then calling the saints and widows, he showed her to be alive.

Since Easter Sunday, the weekly Wednesday morning Bible study group has been using a slightly different approach to scripture.  Instead of staying put around the table and looking at all three readings for the coming Sunday, we’ve been focusing intensely on one reading, using techniques developed by the preaching professor Anna Carter Florence and explored in her book Rehearsing Scripture.  Florence recommends entering the scriptural story by way of the verbs:  looking at what people (and God) do in the text, and thereby finding out how those doings resonate with our own activities and experiences.  As the culmination of each session, we’ve actually acted out the scripture, assigning parts and moving around the sanctuary to see how it feels to literally rehearse the text.

We used this approach on the story of Tabitha (also known as Dorcas), this week, and we discovered several things. First, that this story has a lot of verbs, at least for such a short narrative.  And second, that putting ourselves in the places of those participating opens up all kinds of questions.  To name just a few – what does it mean that Tabitha is named a disciple in this passage (the only time in the New Testament, in fact, that the feminine form of the noun is used)? Were her illness and death sudden?  When her companions sent to fetch Peter, what were they hoping he would do? How did the people who were in the room with Tabitha’s body feel when Peter put them outside? What was the content of Peter’s prayer? What does it mean that God never explicitly speaks or acts in this passage?

And, most importantly, how did Tabitha feel about it all?

And I’m not asking that question just out of human curiosity – “tell me, Tabitha, what was it like to be dead?” I’m asking because this question in particular opens up huge realms of investigation about our lives, our faith, and how we share them with the world.

Grace Lavigne, who had the part of Tabitha in our little role-play, once she had been raised from the dead and we were debriefing the experience, pointed out that she wasn’t sure if she really wanted the attention she was getting, and anticipated continuing to get, as a result.

She was, after all, a woman who was used to serving in a very concrete and inconspicuous manner.  She was noted for “good works and acts of charity” and for making clothing for those in need (a very serious commitment in those days when every inch of fabric had to be woven by hand). It is probably safe to assume that she wasn’t known as a preacher or prophet.

So what happened to her life and to her faith when she was raised from the dead by one of the apostles and suddenly thrust into a bright and unavoidable spotlight, lauded as the source of the conversions of many believers?  Did she have to learn a whole new vocabulary to talk to curious people about her experience?  Was she suddenly besieged with requests to speak, to testify and witness?  Did she get fed up and insist that she be allowed to go back to weaving and sewing?

How, in other words, did Tabitha feel about becoming the poster child for resurrection?

Part of the task of the church in the 21st century is to re-learn how to talk about what God has done in our lives.  That requires pushing outside our comfort zones.  Tabitha was a disciple who served by doing, and she and her companions, the widows (Tabitha was probably also a widow, but the text doesn’t explicitly say so) were comfortable displaying her good works in those terms.  But maybe they weren’t so comfortable talking about her resurrection from the dead.  And yet, it had happened; there was no getting around that, and people’s lives were changed as a result. Tabitha will have had to find the language to interpret it, if only to herself, as she struggled to adjust to this new reality.

Many of us have probably had experiences that we struggle to understand, to interpret, to find words for.  They may not be as unequivocally positive as being brought back from the dead.  But we can still find the movement and work of God in them, perhaps in supporting us through a time we weren’t sure we would make it, or providing just the right people to show up at just the right moment, or revealing an unexpected moment of insight that changed our course completely.  We can learn to speak about these experiences to others, even if it puts us a little outside our comfort zone.

It is appropriate, in a way, that this text happens to land on Mothers’ Day this year.  Not because it foregrounds the creative work and caregiving ministry of women – although it does do that.  But because it opens the door to such a wide variety of experiences.

Maybe Tabitha was thrilled to become the poster child for being raised from the dead.  Or maybe she would much rather have stayed quiet and anonymous.  We don’t know, and there is nothing wrong with either response.

God can still be with us in all those experiences.  We can still learn from all those experiences.  And as we articulate how we have been challenged, learned, grown and changed, we can share that hard-earned wisdom with others – not in a preachy, prescriptive way, but in the manner of one traveler helping another find the next signpost along the way. Tabitha was able to witness to the new believers her experience of finding God both in unobtrusive daily work and in the most dramatic possible experience. And it’s entirely possible that her witness was not straightforwardly celebratory, but nuanced, reflective, looking at the potential complexities of resurrection as well as its joys.

The whole world may be going to brunch for Mothers’ Day, but in the church, today is still Easter. And if Tabitha is the poster child for resurrection, so are we all.  We have died and risen again with Christ in our baptism.  God has worked in our lives in wondrous ways.  May we find the words to share that experience with the curious, the wondering, and the confused, so that many may come to believe.

« Reconciliation on the Road and on the Shore
Baptism, then and now »